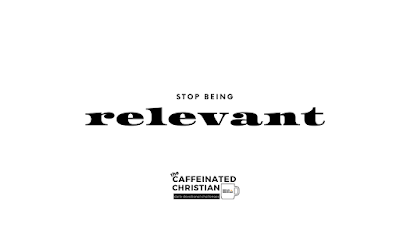 In the 1990's we began to use the word "relevant" to quantify emerging expressions of the Christian faith that connected with culture. You were relevant if you could hold to the central teachings of Christ but yet show the world a sanctified way of doing what you do. It's Christianity with better lights and more bass. It's pastors who use edgy films as sermon illustrations and worship leaders who could use Southern Rock for the offertory.

Relevant was our both/and strategy to reach the world with the gospel.

In 2008 I was having breakfast with a friend from Romania. We were in a local dive that featured a wide variety of cholesterol-infused foods and 60-inch screens on every wall.

As we applied butter to our biscuits, we noticed a Romanian gymnast competing in the Olympic games on one screen. On another screen was a segment about Tim Tebow. Romanian gymnasts are historically some of the best in the world. Tim Tebow is one of the greatest college football players of all time - and at the time, Christians considered Tebow extremely relevant.

So I explained Tim Tebow's relevance and the importance of Christians having a voice like his on a platform like that.

What he said next has echoed in my mind now for over a decade. He said, "In my country, you can't be a Christian and an athlete. You have to be one or the other. You can't be both."

In three sentences, he assassinated our both/and approach to relevant.

I rebuffed, "But we've got to be relevant." He explained that in his country, it wasn't a matter of relevance but faithfulness. He outlined the demands placed upon their elite athletes and how there was no way a person could meet those demands and also fulfill the call of Christ.

I think back on that conversation a lot as I've watched Christian families spend more and more time on ballfields and less and less time in church over the past decade.

His words ring true as we now see actors and artists who have poetic ways of expressing ways they see Christ in music and film but seem to have no concern for Biblical morality. In Jesus' name, they are no different. It's as if Christ is part of their art, but not part of their lives.

And since our conversation, we now have an aspect of cancel culture that draws clear lines of demarcation where relevant Christians were once not willing to do so.

Ironically, cancel culture now has more in common with Romanian believers than we do. Neither has an interest in Christians being relevant. Romanian Christians never wanted in. Cancel culture wants us out. Now that the age of relevance is a bygone era of American Christianity, what are we to be? If we can't be relevant, maybe it's time we get back to being different.

If we were to evaluate the offer Pharaoh made to Moses in Exodus 8 through the lens of relevance, how do you think we would have responded?

Think of how Great Commission Pharaoh's offer sounds to the relevant. "Go, sacrifice to your God within the land." And if you've got to go, just "don't go very far away."

Looking back on my "relevant self," Pharaoh's strategy has a lot of appeal. It's an opportunity to Israeli-tize Egypt. We could make sacrifices but not be "far out." They just don't get us yet, but they will! What a fantastic, relevant opportunity.

But don't miss Moses' response to the relevant plan.

Moses was blunt but insightful. If we do what God wants us to do, it won't be relevant but repulsive. God hasn't called us to be relevant but to exit. Later he would send the message. You are welcome to come with us, but God will not allow us to stay here.

What Jesus DIDN'T mean by salt and light.

One of the standard apologetics for our relevant phase was the salt/light saying of Jesus in Matthew 5. Relevant interpreted "salt and light" with the words "agents of change." We took it to mean that it was our duty to flavor culture with Christianity. But this is a gross misinterpretation of the text.

Jesus used salt and light to speak of the stark contrast his people would be to the pervasive culture. We are not flavor; we are contrast.

We are salt in vanilla ice cream. We are the people who turn on the lights and stop the party. We end the darkness. We don't dance in it.

Salt and light mean that we get the EXACT reaction we see from cancel culture. It's that aspect of our faith to which Moses calls attention. If we do what God wants us to do, we are not relevant but repulsive. We are far out, and if we do it right, you won't want us here.

Salt and light and Exodus

Salt and light is an exodus call in a decaying culture. Indeed, we are not like Moses in this respect. We are staying, not leaving. We live in Egypt, and we are going to be here for a while.

If we were to draw Biblical parallels to our current situation, we are more like the Israelite exiles in Babylon than the Israelites packing up to exit Egypt. But while we are here, we are to be distinct, not relevant.

And while we are here, we do send a very clear exodus message. When it comes to culture, we are "far out." What Jesus has called us to do is repulsive, not relevant. He has called us to atonement in His blood. He has called us to be distinctly His. The early church gave us the precedent that we are to be a spirit-filled people, devoted to the teachings of Scripture, to worship, to communion, and to prayer (Acts 2:42-47).

The problem with relevance is we want to name the name of Christ but make no adjustments of devotion.

We are not called to be Christian versions of homosexuality, cohabitation, and fornication. We are to pattern Christ and the church as husband and wife (Eph. 5). Sexually we are not relevant. We are repulsive.

Why so distinct? Because, like Moses, we do look to exit. This is not our home. We may vote in this nation, but Jesus is our King and His Kingdom "is not of this world (John 18:36)." We are sojourners and pilgrims who realize that relevance wages war against the very fabric of our redeemed souls (1 Peter 2:11).

We are here, not to sanctify the culture, but to call people out of it. We are leaving, and Christ's Kingdom is coming. We are here to serve notice that the current version of the world is about to be evicted, and the meek shall inherit the earth (Matthew 5:5).

We aren't here to Christianize the culture. We are here for a revolution. Our Kingdom opposes this world, it doesn't flavor it.

We are entering a phase in which what my friend said of his country is true in ours. Maybe we can no longer "be both." Maybe we are long overdue.

Cancel culture is about to crucify our relevance. And I am glad! Perhaps what resurrects will be much more akin to Jesus' call.

Let's admit it Relevant; it didn't work. We didn't Israelit-ize Egypt, did we.

We danced with the devil. We confused the gospel. We became worldly.

It's time for us to do what Moses did and reject Pharaoh's strategy. It's time to go far out and be repulsive. We are not to compliment culture, we are to counter it.

Jesus saving people from the wrath of God does not produce a cleaner version of culture. It creates an alternative Kingdom.

It's time to bring an end to relevant.