The Problem of Becoming Pointless 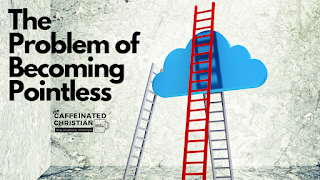 We are well aware of the moral pitfalls of sex, anger, substance, greed, gluttony, and so forth and so on. Got it! As dangerous as those moral pitfalls may be, Paul’s letters to Pastor Timothy draw our attention toward another. It’s a pit without the public shame of more popular sins, but one just as deep and dangerous. It’s the pitfall of becoming pointless, the trap of the tautological, the moral failure of foolishness.

Paul calls attention to the pitfall of pointlessness numerous times in 1 and 2 Timothy.

Pointless are the vain discussions of 1 Timothy 1:6, and the irreverent and the silly myths of 1 Timothy 4:7. Pointlessness is a pit that renders unsuspecting women idlers, gossips, and busybodies (1 Timothy 5:13). Pointlessness is our craving for controversy and quarrel that produces no solutions, but yields envy, dissension, slander, evil suspicions, and “constant friction among people who are depraved in mind and deprived of truth (1 Timothy 6:5a).”

In 1 Timothy 6:20 Paul warns us not to fall into the trap of irreverent babble and contradictions that falsely masquerade as “knowledge.”

It’s all interesting but pointless.

In 2 Timothy, Paul goes on to warn Timothy “not to quarrel about words.” Why? Because it “does no good, but only ruins the hearers.”As an example, he cites two people who have already swerved from the truth (2 Tim. 2:17). Later in the chapter, he calls them “foolish and ignorant controversies” that only breed quarrels (2 Tim. 2:23).

The end result of all of this is that in the last days, the church will be filled with people “ever learning but never able to arrive at the knowledge of the truth (2 Tim. 3:7).” And people who fall into this pit will find plenty of leaders who will affirm their pointless pursuits. “For the time is coming when people will not endure sound teaching, but having itching ears they will accumulate for themselves teachers to suit their own passions, and will turn away from listening to the truth and wander off into myths (2 Timothy 4:3-4.”

It’s a moral tragedy when we fail sexually. Sexual sin objectifies people, destroys families, and ruins testimonies. We, the people of God, are apt at pointing fingers at the fornicator, the adulterer, and the homosexual. We talk A LOT about those sins. But what Paul wrote about to Timothy most of all was not the problem of sex, but the problem of becoming pointless.

In light of Paul’s warning, I want to call attention to what I deem to be a few examples of our current problem with the pointless? And like Paul, I agree that these are particular problems for us pastors.

Pointless Tweets and Such

There is no greater evidence of our propensity toward pointlessness than Twitter. Sure the argument can be made that Twitter is a necessary tool in this era of social media, but I see more pointlessness on Twitter than effectiveness.

And I think the pitfall of pointlessness on Twitter is the one I stumble into repeatedly. It begins with pride. It is the false delusion that what we say is that important. Well, maybe it is important. Or would be important if it were not posted on Twitter. So maybe what’s pointless about Twitter is not so much what we say, but where we are saying it. We would serve the Lord more effectively if we spent less time on Twitter (and such) and more time with people. I have come to the conclusion that in over 10 years of trying, I have accomplished nothing on Twitter. The whole thing is pointless. It was a trap, and I cannot get that lost time back. I said a lot and did nothing – pointless!

Scott Barkley, a national correspondent for Baptist Press, posted that he asked a pastor about the prevalence of QAnon based discussions in his church. He said, “It’s about 50/50 on those who dismiss it and those who think there’s a lot to be considered, without much middle ground.”

In recent weeks I have read numerous posts from Christians on social media propagating conspiracy theories. Those theories involve the arrests of the Pope and the President of Italy for their role in rigging the US Presidential election. They said that in a matter of days that American would be under martial law. They predicted 10 days of darkness in which the power grid shuts down and financial services are unavailable.

But the reality is that we are not under martial law. My ATM card still works. The last time I checked, the President of Italy continues to preside over the world’s largest cache of mozarella cheese and the Pope seems to be doing just fine.

So when you ask these conspiracy theorists to explain this reality they tell you that martial law is delayed and that the Pope is a hologram. They say that the President Biden we see is an actor and that the Oval Office is a set on a studio’s soundstage.

As astounding as those allegations are, here’s the shocking reality. The same people who claim that the Pope is a hologram and that our President is an actor are the same people who are supposed to be telling the world that Jesus is the Son of God. If you have a good explanation for how Italy rigged our election, also remember that you are to explain that Jesus will return and that we need to repent of sin and by faith receive Jesus Christ as Lord and Savior.

Paul’s warnings to Pastor Timothy about pointlessness are followed by admonitions to be faithful to the Word of God. When the people of God put more weight into the ramblings of a middle-aged man who says he has military connections than we do into the Word of God, we negate our witness and are diving headfirst into a pit of pointlessness. We “wander off into myths” as Paul warned the pastor in 2 Timothy 4:5.

The remedy is for us to leave the conspiracy theories alone and return to the Word of God (2 Tim. 4:2).

Allow me to submit some perspective.

Only 12% of people age 18-24 identify as Evangelical Christian. So do you really think that 88% of people 18-24 give a rip about your definition of predestination?

There are 56 million religiously unaffiliated people in America that statisticians classify as “nones.” The number of nones has increased by 19 million between 2007 and 2014. When these 56 million people drive by our churches, do you think they wonder where we are on limited atonement?

How many “nones” wonder if we hold to Reformed theology, sing Getti songs, or watch Furtick? Here is the answer. NONE.

Doctrine is important, but there is a time and place. So perhaps it is not the content of our conversations as much as it is the passion for it and the resulting priority we put on it that plunges us headlong into the pit of pointlessness.

In 1 and 2 Timothy, Paul ever steered the pastor toward preaching. His priority was to proclaim the Word of God, not to split hairs over it. Is a half-day in a coffee shop dissecting limited atonement discipleship, or is it a dereliction of duty and neglect of our obligation to proclaim the good news to the nones?

If we are more concerned about writing articles that articulate every nuanced application of the gospel to Christian ethics, but we fail to communicate it to people headed for Hell, what’s the point? Has Jesus died only for our excellence, or did he not die for the glory of God in saving the lost?

The end result of our passion for doctrine is that we have massive websites on which thousands of articles have been published for well over a decade that carry the name of the gospel but fail to actually proclaim it. You will find countless rebukes of pointless political fervor, historical discourses on the folly of the invitation, but not one clear presentation of the gospel that calls a sinner to repentance and faith in Christ. We may be intelligent for the glory of God, but there is no glory of God in the pointless.

There are probably numerous things in my life and your life that we would find to be pointless ramblings and disputes if we evaluated them according to 1 and 2 Timothy. The same would probably be true for our church. The reason for this is that we are keenly aware of our temptations toward things like sex and wealth. We are open with our struggles with stumblings in anger and pride. But I am afraid that we have ignored Paul’s numerous warnings about becoming pointless.

We must be careful because the road to pointlessness is paved with passion.

Fixing controversies and winning quarrels seem like worthy causes. Myths do not seem silly. Myths are interesting. They tempt us to go deep into the quest to find the “real truth.” But in a world full of nones, it is dangerous to become trapped by what doesn’t matter.

In a confused culture and far from Christ, we should apologize to God and repent of the sin of being pointless.