'Slow Your Roll' On Cuomo 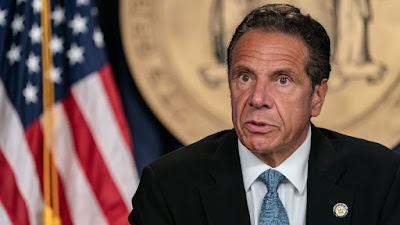 The prophet Nahum tells us that the Lord is not quick-tempered. The Almighty is not prone to irrational outbursts or fits of rage. Nahum describes the Lord’s anger as “slow.”

The Lord is slow to anger and great in power, and the Lord will by no means clear the guilty. His way is in whirlwind and storm, and the clouds are the dust of his feet.

James 1:19-20 echoes this truth in the perspective of God’s people.

Know this, my beloved brothers: let every person be quick to hear, slow to speak, slow to anger; for the anger of man does not produce the righteousness of God. James 1:19-20

Everyone gets angry. There is enough wrong with the world that we should get disgusted daily. But Nahum 1 and James 1, taken together, provide critical counsel when it comes to our anger.

Nahum 1 says that God is slow to anger and that He will by no means clear the guilty. That means that when God gets angry, He gets it right every single time. His anger doesn’t fail. It isn’t misinformed or deceived. God understands evil thoroughly and vents his anger perfectly.

James 1 tells us that like God, our anger should be slow, like God’s anger. But James cautions us that when it comes to our anger, unlike God, we probably don’t have it right. Our anger can be misinformed and easily deceived. We don’t understand the situation perfectly.

The problem with misguided anger is that it makes a mess. It vents at a situation without proper focus and thus fails to put forth the appropriate solution. The anger of man does not produce the righteousness of God.

A recent situation has served to demonstrate this truth perfectly to the Christian community. In recent weeks Governor of New York, Andrew Cuomo, has been in hot water over his alleged cover-up of COVID deaths in long-term care facilities in his state. As those investigations are ongoing, now 3 of his former female aides have come forward to accuse Cuomo of sexual harassment.

Many Christians are also politically conservative people. Over the past 3-4 years, we have all witnessed the vitriol of the #MeToo movement as numerous women came forward to air their grievances over predatory men.

And then in 2018 came the Kavanaugh hearings in which a woman accused a Supreme Court Nominee of sexual abuse. Political liberals were enraged, and the media was quick to jump on the story.

The coverage and response to the Cuomo and Kavanaugh accusations have been markedly different. With Governor Cuomo there has been little to no #MeToo, and the media coverage has been slow and protective of the left-leaning Governor.

And that makes a lot of people mad! They want to see an end of media bias. They want to cancel the cancel culture. They want a Democrat to feel the same cultural #MeToo wrath as a Republican.

Now, let’s go back to Scripture and slow our roll.

You may be angry, but do you have it right? Remember Nahum 1. God is slow to anger and He always gets it right. Remember James 1. Will your anger produce the righteousness of God? No. So before you vent your opinion on social media, slow your roll and take a step back. Are you angry at the right thing?

Should we be angry over media bias? Sure. But should the focus of our anger be more for a predatory man who sexually preys upon a female image of God?

Ask yourself this question. Will repentance over media bias bring about righteousness in sexually dangerous men? If CNN became more balanced in their coverage, would that motivate you to become more sanctified sexually? Probably not.

But real righteous indignation in our culture over people, Republican or Democrat, conservative or liberal, who use their power to prey upon others would serve well the moral conscience of our nation. Genuine righteous indignation over sexual predators would bring about repentance and revival among God’s people as we seek to purify ourselves.

If you’re angry over media bias, you’ll just change the channel to one that better supports your view. I would hardly call that “producing the righteousness of God.”

There is a lot wrong with the world and we have a right to be angry. But anger is not an expression of frustration. Anger is a motivation for righteous change. Therefore we must take the counsel of Nahum and James.

When it comes to anger, God is slow and gets it right. We would do well to slow our reactions and think through our responses. If God isn’t in a rush to judgment, neither should we. Let’s slow down and get it right so that we can seek the Lord with the hope that He will bring about righteous change.