Is It Wrong to Want? Why it is Dangerous to Be Covetous 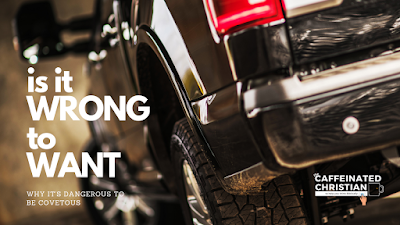 A friend of ours bought a piece of furniture from us. She came over on a Saturday morning to pick it up and pulled into our driveway with a fantastic truck. It was 4x4 and sat up high. When you open the doors, running boards automatically descend from the undercarriage. This truck had so many cameras, upgrades, and systems that you don't really drive this truck. You pilot it.
I liked that truck.
I'd like to have a truck like that.
There's probably a lot of things like that truck that you've seen and thought the same. Your neighbor's pool is nice, but wouldn't one in your backyard be even nicer?
Is it wrong to want?

A voice from the crowd gets Jesus' attention. It's a man in dispute with his brother over their inheritance. The man appeals to Jesus' authority to settle the score, but the master refuses to get involved.

Teacher, tell my brother to divide the inheritance with me." But he said to him, "Man, who made me a judge or arbitrator over you?" Luke 12:13-14

The voice of Christ can calm a raging sea. It would be no problem for the Lord of All to command the brother to write a check. So why not? Jesus explains:

And he said to them, "Take care, and be on your guard against all covetousness, for one's life does not consist in the abundance of his possessions." Luke 12:15

Jesus refuses the man's request because granting it would be dangerous.
Notice Jesus' words, "take care, and be on guard against." We might use the words "beware" or "watch out." In much the same way we would post a sign on the gate of a fence containing a dangerous dog, Jesus has just served notice to the man, "Beware of what you want."

The Serious Sin of Covetousness

The dangerous dog in the fence is commandment #10. Jesus tells the man to be on guard against covetousness.

Despite its low placement in the top 10 of sin, covetousness is dangerous. In a materialistic culture, we consider covetousness to be more of an unfortunate issue than a heinous sin. It's something to smile sheepishly about, but we hardly think it as something of which we need to beware.

But in the ears of Jesus' audience, this would not have been the case. For them, covetousness and greed were expressions of depravity on par with murder and adultery. (1)

Covetousness is desire on fire.

So what's the problem? Why is covetousness so serious that it garners such a warning?

Notice that Jesus doesn't warn the man about the inheritance. The Bible teaches that an inheritance is the product of wisdom and blessing. A man who can pass along an inheritance is a careful planner, a good man who is a blessing to his generations.

A good man leaves an inheritance to his children's children, but the sinner's wealth is laid up for the righteous. Prov. 13:22

The problem is not in what the man wants but in the way he wants it. Covetousness is desire on fire.

Covetousness isn't your appreciation of a nice truck. It isn't covetous to recognize that this truck is much nicer than my truck. That's just honest. It's not covetous to think that it would be nice to have a truck that deserves a pilot.

Listen to the man's demand of Jesus, and you can hear how covetousness has hijacked his want.

He does not praise the Savior. He commands Him. "Teacher, tell my brother . . ."

Think of how many have brought their sick and dying to the master for healing. This man doesn't want healing. He doesn't even want reconciliation. He wants arbitration.

Nicodemus came to Jesus wanting eternal life. The man wants The Savior to cut him a check.

Covetousness will fill you with the idolatrous delusion that you are in command of God.

As Jesus rebuked the wind and the waves, he rebukes the covetous man. "Man, who made me a judge or arbitrator over you?"

Graciously, Jesus does not end his conversation with the man with rebuke. He will now take time to give the man reasons why he needs to beware of covetousness.

And as the Rabbi often does, he begins with a story.

Jesus tells the story of a man who had a large harvest and responded by building bigger barns. By business standards, we would consider this man successful. In the minds of Jesus' audience, this man would be considered blessed.

But all of his success became an eternal waste.

The man now calculates his future.

In the man's mind a big harvest + bigger barns = a successful, enjoyable future. But the man-made some major miscalculations.

That afternoon the man admired his barns. That night the man met the Lord. And notice that the Lord did not ask him the worth of his barns. Instead, the Lord revealed to the man that his gain was now a total loss.

"But God said to him, 'Fool!' This night your soul is required of you, and the things you have prepared, whose will they be?" Luke 12:20

The word fool reveals the fault of covetousness.

In the Bible's books of Psalms and Proverbs, a fool is someone who lives as if there is no God (Ps. 14:1). The beginning of wisdom is the fear of the Lord (Psalm 111:10, Prov. 1:7). Wise people always factor God into the equation.

Fools calculate a future without God in the equation.

So Jesus ends the story with an indictment.

"So is the one who lays up treasure for himself and is not rich toward God." Luke 12:21

The man who wanted the inheritance is like the fool who built the barns. The problem is barns, inheritances, or money. The problem is that fools bank their futures on it. Fools think that they need bigger barns, nicer trucks, and more money to secure their futures. But they miscalculate the possibilities of tomorrow in a sin-cursed world. Worst of all, fools leave God out of the equation.

An inheritance can make you a rich man. But the problem with covetousness is that it will never be enough. You'll just build bigger barns and bank on a false future. Your pockets are filled, but your future is empty.

What you wanted was worth something in this world but is worth nothing in eternity.  Covetousness ends in tragedy. What you wanted failed to give you what you eternally needed.

Jesus now shows the man a better way to live. And he does it by calling attention to things we see every day: birds, flowers, and grass.

The birds are fed. The grass grows. The flowers are beautiful. God has hardwired nature to take care of all of this. It's all His. God has a purpose, a plan, and provision for all that is His.

And it's all His.

The Creator God values His birds, His flowers, and His grass.

And then Jesus asks a question revolutionize the way you live if you will dare to answer it and believe it. "Of how much more value are you than the birds?"

We value clothes, trucks, money, and a multitude of material things. So we run after them daily, thinking that without them, we have no future. Jesus calls this anxiety (Luke 12:22).

But God values you. You are His. He has a purpose, a plan, and a daily provision for you. You and I don't need more. We need to realize that our lives are about more.

God is working every day to provide you with what you need. You don't "have to have it" because He has you.

So if God is working in the every day to provide the Kingdom for His people, then that means that you and I can live liquid.

Sell your possessions, and give to the needy. Provide yourselves with moneybags that do not grow old, with a treasure in the heavens that does not fail, where no thief approaches and no moth destroys. Luke 12:33

Instead of building a bigger barn, the man in the story would have been better off seeking ways to use his huge harvest to value people and point them to The Kingdom.

And this the reason Jesus refused to settle the man's dispute over the inheritance with his brother.

It wasn't because Jesus lacked authority.

It wasn't because the man had no right to the inheritance.

It was because the man valued the inheritance more than people, more than God, and more than eternity.

Great lunch, but out of place.

I was invited to attend a workshop with a friend. It offered a great lunch, but I was out of place.

I'm a pastor. The other 64 people in attendance were business owners and CEO's of high-caliber companies.

The business and corporations around the table represented millions of dollars in annual revenue. These were people of substantial harvest.

I may have been a little out of place, but I was glad I was there. I learned a lot.

One of the most profitable tools the leader offered was a rubric to help business leaders evaluate how they eternally impact people for the Kingdom of God.

The page was lined into a grid. Together the grid formed 12 boxes in which every leader could create a calendar and a business plan to use their resources to impact people.

Maybe your rubric would read differently. Possibly down the side would be BOSS, FAMILY, FRIENDS, NEIGHBORS. How might God use you to impact them eternally by blessing them physically, mentally, and spiritually? What could you put in your truck and haul to the poor that would manifest the daily provision of God and His value of them?

It's not wrong to want.

It's dangerous to be covetous.

Covetousness is desire on fire. The end result is the eternal waste of your stuff.

Bigger barns and trucks that need pilots are nice, but misguided wants lead to false futures.

"For where your treasure is, there will your heart be also." Luke 12:34

The inheritance was his, but his heart was in the wrong place. Though the man wanted it, Jesus knew the man would be better off without it.

Joel B. Green, The Gospel of Luke, The New International Commentary on the New Testament (Grand Rapids, MI: Wm. B. Eerdmans Publishing Co., 1997).