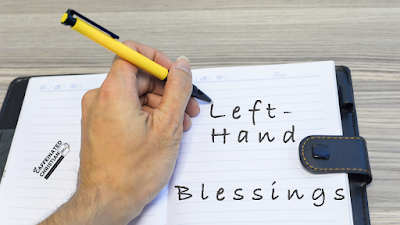 What is it that you put before the Lord and asked Him to bless, but He hasn't? What was that great idea you had that you prayed about but couldn't get going? You put it before the Lord, but The Almighty took a pass.

It happens. And it's disappointing. You have a great vision, but God doesn't seem to see it the same way as you. Why does this happen?

It happened to Joseph.

In Joseph's life, there was a definite precedent of blessing. Whether enslaved, accused, or imprisoned, God blessed him. Despite the evil against him, God used Joseph mightily.

And now the health of Joseph's father is failing (Gen. 48). It's time for Israel's (formerly Jacob) blessing to be passed along to Joseph's children.

So Joseph places his two sons before their grandfather. Israel cannot see well (Gen. 48:10), so Joseph lines them up the way he thinks they should be blessed. Manasseh, Joseph's eldest, should end up in Israel's right hand and Ephraim should end up in the left.

But Israel crossed his hands and did not hand out the blessings according to Joseph's design (Gen. 48:15-16). And Joseph responds.

When Joseph saw that his father laid his right hand on the head of Ephraim, it displeased him, and he took his father's hand to move it from Ephraim's head to Manasseh's head. And Joseph said to his father, "Not this way, my father; since this one is the firstborn, put your right hand on his head." But his father refused and said, "I know, my son, I know. He also shall become a people, and he also shall be great. Nevertheless, his younger brother shall be greater than he, and his offspring shall become a multitude of nations." So he blessed them that day, saying, "By you Israel will pronounce blessings, saying, 'God make you as Ephraim and as Manasseh.'" Thus he put Ephraim before Manasseh. Gen. 48:17-20

Sometimes you have a right-handed vision, but it ends up a left-handed blessing.

I have a pile of left-handed blessings. I put these things before the Lord with the greatest of intentions, but they did not find His favor. That's not to say they were useless. They did some good things, but they were not great.

Of God? He was kind, but I found less favor.

Whatever it was, I had it lined up to go into God's right hand, but it ended up in his left. Blessed a little, but not nearly as much as I desired or designed.

And let's just say it. Like Joseph was with Israel, it displeases us when the Lord does this with us. We don't like it when our right-handed plans end up as God's left-handed blessings. When our "big things" end up God's "lesser things," it makes us mad.

Now let's dissect our disappointment. Are we dejected more because somewhere between us and God things got crossed up, or are we dejected because that same thing ended up in God's right hand for someone else?

That pastor wrote a book and everybody bought it. I wrote two books and so far I have sold more of them to myself than anyone else. It was a right-handed idea, but I have a box full of left-handed blessings in my basement.

Your business did not go like their business. Your kids didn't end up like their kids. Your project wasn't nearly as amazing as hers seemed to be.

The day you dreamed it was incredible. Now that you are doing it . . . not so much.

Somewhere, somehow between you and God, it got crossed up.

And you are displeased.

I get so sideways on what winds up in God's left hand that I forget to pay attention to what He's holding in his right. I do what Joseph did. I try to take the hands of "the blesser" and realign them. "But his father refused." I make my case for Manasseh when the best He has for me is in Ephraim.

There are some definite Ephraims in my life.

So I'm not a best-selling author, but I have spectacular, godly daughters. And I still have a year or so left with my youngest. The time I have left with her at home is my Ephraim. This next year or so is in God's right hand.

For some reason, God has not chosen to use me as a speaker, but He has given me a great assignment to pastor. Speaking to other groups on occasion is my Mannaseh. I may get a few opportunities. But the people I pastor day to day are my Ephraim. I shouldn't underestimate that blessing.

Israel didn't get it crossed up.

God doesn't have it crossed up.

It's easy for us to get crossed up on how things end up.

Pay attention to what God has touched. Be careful that you don't quote Jeremiah 29:11 and then hand God the plan.

With God, it probably won't end up how you line it up. But He's good. He blesses. Pay attention to what God is doing instead of getting crossed up in what you think God should do. Israel had something special for Joseph (Gen. 49:22); God has something unique for you.

At some point, you (and I) have to accept that some of our right-handed visions are left-hand blessings. They are good, but not great. You may have some talent and there may be opportunities, but you won't find as much of God's favor. So enjoy it, but don't sweat it. Let's not waste our time trying to turn our left-handed blessings into something they are never going to be. Get back to those right-hand things. Focus on what God has favored.