Conversational Gospel (The Real Meaning of the Great Commission) Part 1 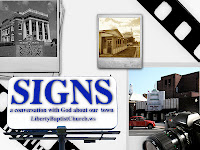 Title:  Conversational Gospel
Series:  Signs
Text:  Matt. 28:16-18
Matthew 28:18-20 is probably one of the most well known Bible verses in evangelical churches. This is our mission to go into the world and share Christ with people.  When you study  the passage word for word it has an interesting break down that is often missed in our translations. The common understanding of the passage is that our mission consists of several components:

1) Going
2) Discipling
3) Baptizing
4) Teaching
Because of the way we understand the passage the church has developed a more
institutional approach that often looks something like this:
1) Going - is expressed in mission trips and visitation programs that are most often built
around a canned approach to sharing the gospel message. The success is
measured in converts. “We had 15 people saved” and so forth and so on.

2) Discipling - is expressed in a set aside time of teaching, a program of offered classes,
etc. The purpose of discipling is to help a person gain a certain degree of
understanding. In this sense success is measured in what one knows or by how many classes one has completed.

3) Baptizing - is something a church does to its converts that is viewed as an
initiatory rite of passage. Once a person is baptized, then they are a member.
Success is measured by merely participating in the act of being baptized.

4)  Teaching - is the ongoing process of instruction that the church offers.  It is most often done by its most gifted congregants who become “teachers” or pastors.    We trust the teaching to them.  The place of teaching is inside the church building. In this sense there are very few if any discernible differences between discipling and teaching.

So we see the Great Commission as being something very command driven and numbers oriented. If I am to win people to Christ I must go, teach, baptize - institutionalize. The goal is to get a person into the program of the church.
It is here that a careful study of the words used in the text reveals something very interesting. There is only one command in the Great Commission. Do you know what it is?
The most popular answer is “Go.”  Yet you may be surprised to know that “Go” is not the command. Jesus is not commanding us to go anywhere.  You may also be surprised to know that Jesus is not commanding us to teach or to baptize. The only thing Jesus commands us to do is to “make disciples.” What is a disciple?
Here are some perspectives that may help us get a sense of the word:

I think what is important to note here is that we are not thinking of evangelism in terms of “conversions” as if it is fulfilled in a moment.  The concept of evangelism that is true to Jesus‘ commission to us is disciple making, which is something all together different than simply persuading someone to believe.  We are not merely asking someone to pray “a sinner’s prayer.”  Jesus did not simply ask us to believe or to pray, He called us to follow.
Notice in the gospels when Jesus is calling his first disciples together; notice the term here; He did not call on any of them to believe upon Him or to pray to Him.  Jesus called them to “follow” Him (Mark 1: 16, 2:14).  He was asking them to leave their former life of fishing, or tax collecting, or whatever had defined their life to that point and attach themselves to Him as master.  They would now take the next three years to learn life “the Jesus way.”  They would not only listen to His teaching, but they would observe His life, and learn to live it out in the public square.  In the end the measure of success would not be the decision they made in the beginning, nor would it be how much they learned, but rather it would be whether or not they were willing to die for Him in the end.  He did not measure the success of His mission on how many people raised their hands in response to His invitation.  He measured the success three years later on whether or not they were willing to stay with Him to the cross and carry on the mission long after His death; until their own death.

Michelle said…
So thankful for your blog, for your teaching and for the wisdom God has given you in His Word!
March 5, 2012 at 1:38 PM