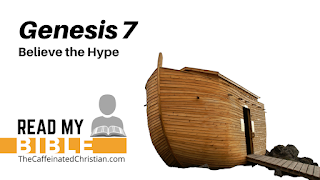 He blotted out every living thing that was on the face of the ground, man and animals and creeping things and birds of the heavens. They were blotted out from the earth. Only Noah was left, and those who were with him in the ark. Genesis 7:23 (ESV)

God has the power to completely destroy the earth in judgment. He has done it before and warns us that He will do it again (2 Peter 3:1-13). Sin will not prevail. Only those who respond to God’s command for sinners to repent and turn by faith to Jesus Christ for salvation will escape the coming wrath (2 Peter 3:9).

What do the following have in common: Star Wars Episode 1: The Phantom Menace, Johnny Manziel, New Coke, and the Segway?

They didn’t live up to the hype. All talk. Like that annoying kid in 3rd grade that said he could jump that enormous mud puddle only to end up with his britches soaking wet.

God created the world. All of it.

But now he’s going to destroy it. All of it?

For in seven days I will send rain on the earth forty days and forty nights, and every living thing that I have made I will blot out from the face of the ground.

And God said He would destroy every living creature. Things have multiplied. There’s a lot of them.

Seven chapters into the story, we have a reality check. If God can make it, He can take it. He is sovereign over creation from beginning to end.

He is able. Almighty. He can do whatever He determines to do. Nothing, no one, and no amount of evil will stop Him.

Genesis 7 is also critical to the story in that God’s promise to flood the earth will not be the last of His audacious claims. Pharaoh will find out. Joshua will experience it at Jericho. Just march. The walls will fall.

Jesus makes an audacious claim to the apostles. He will die and rise again (Mark 8). And He does.

Throughout the Bible, we will find that no matter how audacious the claim may seem to be, God will not be like your buddy who couldn’t clear the mud puddle. If He says it, He will do it.

And this leaves us, humans, in a precarious position. If God determines to destroy the earth, do we have any hope? And here, we are introduced to another one of the Bible’s great themes. The Creator is the destroyer and the Savior. He is severe, yet kind (Romans 11:22).

The only hope we have as sinners before THE holy God who can create and destroy the world is to follow his plan of salvation. So God laid it out step by step to Noah. Three times in the text we read the only right response to God’s plan of salvation.

“And Noah did all that the LORD had commanded him.”

God is powerful but He is also merciful and faithful. His judgment is certain and His salvation is secure. All Noah had to do was get on board. “And the LORD shut him in (7:16b).”

The first time God destroyed the earth, he did it with a flood. Next time he will destroy it with fire (2 Peter 3). It is an audacious claim. As big as the world is and as much as there is in it, it’s hard to imagine it all ablaze.

Humans have cured diseases; we can transmit massive amounts of information invisibly through the air. We have found various ways to fly, and we can escape gravity any time we want. But we cannot save ourselves from sin and cannot escape the coming judgment. The world will not always be as it is. It’s an audacious claim, but one day it will burn.

The hope the Creator gives us is not in a ship but in His son. Our only recourse is to repent of sin and, by faith, receive the salvation that is in Jesus Christ alone. It’s an audacious claim, but He’s all we have, and He has risen from the grave.

He will destroy the earth with His wrath, again.

He has offered salvation in Christ alone.

Have a conversation with someone about how they think the world will end. Show them from Scripture how God has the power and a plan to judge His Creation, but how He also has a plan of salvation for those who will respond.