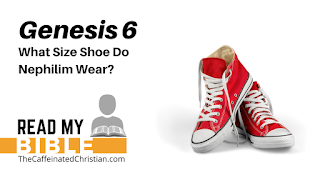 The multiplication of people increases their number, power, and evil (6:1-4). The LORD reacts with regret over that depraved state of humanity and determines to rid the earth of them (6:5-7). However, God favors a man named Noah and gives him instruction on how to escape the coming judgment (6:8-21). Noah obeys the Lord and enters into a covenant with Him (6:18, 22).

But I will establish my covenant with you, and you shall come into the ark, you, your sons, your wife, and your sons’ wives with you.

Humans are powerful, and our advancements are amazing, but we have a problem. We are depraved in sin, so where people increase evil increases. The world as we know it is confined to judgment just as it was in Noah’s day (2 Peter 3:5-7). As God saved Noah through the ark, so will He save everyone from the coming judgment who will enter into covenant with Him by repentance from sin and faith in Jesus (2 Peter 3:9).

The opening paragraphs of Genesis 6 read like something out of ancient mythology. The sons of God are procreating with the beautiful daughters of man. Their union gives rise to legendary figures, mighty men of renown. And if that weren’t fantastic enough, there were also Nephilim, or giants on the earth in those days (Gen 6:1-4).

You probably have some questions. Who were the sons of God? Are these angels? Could they be demons? What size shoe do Nephilim wear?

Unfortunately, I don’t have the answers to those questions, but you are welcome to do as I have done and research the countless pages of commentary about this passage. But here’s a spoiler alert. Bible scholars have solid ideas on interpreting the passage but no definitive answers.

You and I may lay awake at night wondering who the sons of God are. But the Holy Spirit isn’t concerned about curing theological insomnia. And we want to know the biological intricacies of these seemingly mystical unions between the sons of God and the daughters of man. But we know how babies are born, right? If not, be careful how you Google that one.

So let’s get to the only question you need to be asking if you want to read the Bible correctly? What’s the point of the passage? When the Holy Spirit inspired this text, He wasn’t as concerned about the size of giants as He was about their wickedness.

The point of the passage comes in verses 5-8 and verses 11-12. People were powerful but corrupt and evil. The more of them there were, the more evil there was (5, 11). A powerful, evil version of the images of God grieves the Creator’s heart (6). God’s response to evil unrepentant man is to destroy him (7). But as rampant as wickedness may be, God still saves some (8).

So you don’t know the shoe size of a Nephilim. But you now know how God responds to rampant wickedness. That’s the point.

How does a son of God have sex? You probably didn’t need Genesis 6 to explain that to you. So it doesn’t. What you do need to know is that God gives grace even when He has determined to destroy the earth in judgment. So we need to know less about Nephilim and more about how Noah walked with God (9) and found favor in the eyes of the LORD (8). That’s the point of the passage.

What comes next will be cataclysmic destruction (Genesis 7). The mighty men of renown, nor the Nephilim will survive it. We want the Bible to satisfy our curiosities about them, but all God wants you to know in Genesis 6 is that their story comes to an abrupt end. They were not powerful enough, beautiful enough, mighty enough, big enough, or evil enough to escape the judgment of God.

And we aren’t either.

What’s a Nephilim? Who knows, and who cares? If you want to escape the judgment of God, do what Noah did. “Noah did this; he did all that God commanded him (Gen. 6:22).” That’s the point of the passage.

As you read this ancient book called the Bible, you will have many questions. Many will beckon you into a debate or invite you to watch their videos that debunk the Bible. Theological cage matches are not hard to find. But suppose you miss the point of the Bible. In that case, you will not be powerful enough, beautiful enough, big enough, evil enough, good enough, or theological enough to escape the coming judgment. The Nephilim and the mighty men of renown didn’t make it, and we won’t either!

The point of the Bible is that God is the one who judges and saves. So if you want to survive, do what Noah did. Respond to the plan of salvation God provides. For Noah, God’s plan was a gopher wood yacht full of animals. So Noah built it.

For us, God’s plan of salvation is to repent of sin and turn to His Son, Jesus Christ, for salvation. If you want to be saved, respond! If you’re more concerned about what a Nephilim is, good luck with that. It will end the same for you as it did for them.

Take note of 3 news stories today that give evidence of evil in the world. Read the 1st 3 chapters of Romans. What is God’s plan for our salvation?