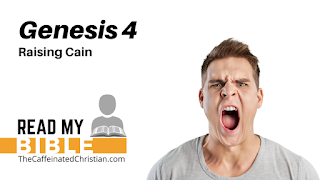 Adam and Eve have two sons, Cain and Abel (4:1-3). The Lord rejects Cain’s offering (4:4). Cain’s response to the rejected sacrifice is to murder Abel (4:8). God curses Cain because of his sin (4:9), and Cain multiplies his generations while wandering east of Eden in Nod (4:10-24). Adam and Eve conceive another son, Seth, who begins another generation that calls upon the name of the LORD (4:25-26).

To Seth also a son was born, and he called his name Enosh. At that time people began to call upon the name of the Lord. Genesis 4:26 (ESV)

Despite the curse (Gen. 3), God remains faithful in that the images of God can be fruitful and multiply. But what comes from man and woman are not saving sons, but sinful ones. Because we are sinful, we are not suitable to save ourselves. Therefore, our only hope of salvation is to do as the sons of Seth and “call upon the name of the LORD (Gen. 4:26, Rom. 10:13).”

Genesis 4 begins with hope. Despite the curse, God promised a son would come from the woman who would crush the serpent (3:15). Based on Eve’s celebration of Cain’s birth (4:1), she believes he is that son.

Eve could not conceive in her mind what it would indeed look like for a woman to have a son “with the help of the LORD.” Mary is the pinnacle of this miracle (Luke 1:35-38), but Eve’s words signal to the reader something we will see several times in Scripture. There will be miraculous births in which women conceive with the help of the Lord. The Savior’s conception will stand alone, but we will also see God help Rebekah (Gen 25:21) and Rachel (Gen. 30:22). The Almighty will give us Samuel and Samson.

Though he comes with God’s help, Cain is not the Savior. Cain is creation’s firstborn sinner. As such, hope will give way to horror as Cain swings wide the gates for evil to enter the world.

We see the subtleties of sin first in misguided favor. Eve celebrates the birth of Cain, but she barely mentions Abel (4:2). Her favor of the elder introduces a prominent theme in Genesis. Over and over, we will see families ripped apart from the jealousy and envy of favoring one child over another. But over and over again, the choice of God will be to grant an unnatural blessing. God will bless the younger over the older. Perhaps it is the precedent of Cain, but the firstborn sons of Genesis exhibit more of the depravity of sin than they do the hope of salvation.

This failure of firstborn sons will set up the scandal of grace in Genesis. In the end, it will be a younger brother who is abused, betrayed, and rejected by his brothers who will save them (Gen. 37-50). Joseph will save his brothers, namely Judah, from whom the saving son will come.

Not to ruin the story for you, but Joseph’s final statement is critical for a proper reading of Genesis. In Genesis, people will behave so badly that if any good comes of it, it is only by the sovereign grace of God.

As for you, you meant evil against me, but God meant it for good, to bring it about that many people should be kept alive, as they are today.

And so here we go as readers, bracing ourselves for the bad behavior of older brothers. How bad can they be? Beware of Cain.

Cain and Abel bring offerings to God. God has no regard for Cain’s offering. But why? Some reading this text will say Abel’s offering was a sacrifice of blood while Cain’s was one of fruit. My opinion is that the absence of blood isn’t the problem. We will see in Leviticus that God has no problem with bloodless offerings of grain and fruit (Lev. 2). I believe the author gives a literary nod to point us to the problem. It’s a clue more apparent in Hebrew than it is in the English translation. But even in the English translation, the reader can see it.

Eve celebrated Cain’s birth by showering him with words. Abel’s birth was an afterthought. His birth is barely mentioned (3:1).

Now, look at the language used to describe the difference in the offerings (3:3-4). 3 Hebrew words effectively describe Cain’s offering. But the quality of Abel’s offering requires more words to convey. It is not just something from his flock in the same way that Cain’s is just something from his fruit. Abel brings a firstborn. Not only is it the firstborn, but he takes time to carefully cut it so that the fat portions are prominent.

Cain is the Bible’s first Pharisee. He makes a sacrifice, but he’s in it only for himself. His heart is far from God as we will soon see (Matthew 23:27-28).

God rejects Cain’s offering and warns him of his reaction (3:5-7). Cain is angry. God has not rejected Cain. In the same way, God asked Adam and the woman where they were, and what they ate, God pushes the pause button on Cain’s anger by questioning it. God is extending grace to Cain.

God awaits Cain’s response. If Cain brings a better offering, he will be accepted (4:7). But if he doesn’t, sin is crouching at the door. And God uses the same language in 4:7 to describe sin as he does to describe the wrestling between man and woman in 3:16. “Its desire is contrary to you, but you must rule over it.”

Cain would have been better off to wrestle sin within himself. But without repentance, sin always wins. So instead of bringing a better offering, Cain decides to murder his brother. Rather than correction, Cain has it in his mind that the solution is to abort his competition (4:8).

Again, God questions Cain (4:9-11). This is amazing grace. But like his parents in the garden, Cain goes into hiding. However, he does not hide behind bushes but words. He hides in his deflection of responsibility and vehement blame of God.

God cursed the ground because of Adam, and He does it again because of Cain (4:11-12). And despite his brother being dead, Cain is now angry because his life will be hard. So instead of taking responsibility for his past, he blames God for his future (4:13-14). It’s a classic move in the human condition.

Cain settles in the land of Nod. The word Nod means “wandering.”

When you favor a child, you raise Cain. A favored child often miscarries our hopes and dreams. A favored child who can do no wrong often gets very little right. And when he crashes, he does not take correction but only blames the world (his teacher, a coach, an ex, and probably his parents) for his wandering.

Cain sets a precedent for every other sinner who never responds to grace. He will experience the goodness of it, but he will never receive it. He will be fruitful and multiply (4:17-24). He will prosper in the Creator’s world. But all he will do is raise more cain (4:24). Cain does not bless the world; instead, he makes it more dangerous generation by generation.

Despite our sin, God has not forgotten His promise (3:15). A saving son will come. Despite the broken blessing Eve pronounced over Cain, she celebrates another son and sees the hope of God in him (4:25-26). Seth, like Cain, is born in sin. So what’s the difference? The sons of Seth do what every sinner must do if they are to be saved. The sons of Seth do not determine their own sacrifice. They dare not dictate to God how The Creator will handle them. They do not blame God, but they “call upon the name of the LORD (4:26).”

Seth’s sons introduce another critical theme of Scripture. The God who cursed us for sin is also the source of our salvation (Romans 3:26, Romans 10:13).

Apologize for something you have done to another person and give them a word of blessing.