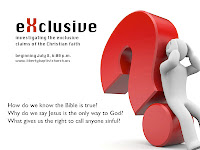 Week 2
How Do We Know the Bible is True?
Transmission of the Text
The Bible claims to be the Word of God.  Yet that statement in itself is not good enough.  In the Public Square of ideas, to simply assert the Bible’s own claim of inspiration is circular reasoning.  As an argument it does not hold weight.  If we do try to assert the Bible’s own claim of inspiration as evidence enough, we will probably be met with arguments such as:

These claims generally fit into three categories:
Before we begin to address these issues, let’s simply take notice of the Bible’s uniqueness.  The Bible is unique (McDowell, The New Evidence that Demands a Verdict, beginning page 4):
We can assert, at the very least, that we are talking about a book like no other religious writing that claims to come from God.  Therefore when we try to put it on par with other works as mere literature or works of antiquity, we are making gross understatements.  While it is also true that other books claim to have been inspired by God, none of them compare with the uniqueness of the Bible.
Two prominent examples would be the Quran and the Book of Mormon.  The Quran was written by Muhammad who claimed to get revelation from God over the span of 32 years beginning in about 610 A.D., some 580 years after Christ.  The Book of Mormon claims to be a translation of golden tablets found by Joseph Smith.  Smith claimed that the tablets were written with Egyptian Hieroglyphics and quoted the KJV 1611 Bible.  It should also be noted, no one ever saw the tablets but Joseph Smith.  It is easy to see that the Bible is truly unique.  It is not like other writings ancient and/or religious.
Having mentioned some evidences of the Bible’s uniqueness, now let’s begin to deal with claims that would attack the Bible’s transmission.  Even if one conceded that the Bible is unique and that it may have been the Word of God, how can we be certain that the form we have it in today is the Word of God?  The Quran claims that the Bible is a Holy Book, but that it has been seriously corrupted.  Many scholars believe that the text as we have it is seriously compromised.  It may contain the Word of God, but as a whole we cannot claim that it is the Word of God.  Scholars of this opinion engage in a discipline known as Textual Criticism.  The task of Textual Criticism is to try to uncover the original form of the text as compared to what we have today.
In general then, we can say that there are two legs to this argument:
The Old Testament Manuscripts
The evidence for the accuracy of the Old Testament texts, in their transmission, is indeed staggering.  When compared to other ancient texts we can say with confidence that no other books compare in accuracy of their transmission.
The New Testament Manuscripts
In Comparison (McDowell, 38):

In Conclusion we can say: