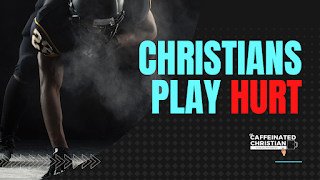 To be a winner, you can't just be good; you've got to be tough.

Jack Youngblood was a Hall of Fame Defensive End who played for the Los Angeles Rams for 14 seasons. He played in 201 consecutive games, refusing to sit out for injuries. Jack Youngblood played hurt.

In the first round of the 1979 playoffs, Youngblood broke his leg late in the game. For most athletes, a broken leg is a season-ending injury. Not so for Jack Youngblood. He played three more games, including the Super Bowl and the Pro Bowl.

Great athletes who love the game know how to play hurt. They aren't discouraged by pain but motivated by it. Championship teams have players who gut it out and play hurt.

A man who wrote much of the New Testament played hurt. His name was Paul, and his life was one of constant persecution, endangerment, and pressure for the sake of Christ and spreading the gospel. Some questioned Paul's commitment. In response, he cited his suffering.

Are they servants of Christ? I am a better one—I am talking like a madman—with far greater labors, far more imprisonments, with countless beatings, and often near death. Five times I received at the hands of the Jews the forty lashes less one. Three times I was beaten with rods. Once I was stoned. Three times I was shipwrecked; a night and a day I was adrift at sea; on frequent journeys, in danger from rivers, danger from robbers, danger from my own people, danger from Gentiles, danger in the city, danger in the wilderness, danger at sea, danger from false brothers; in toil and hardship, through many a sleepless night, in hunger and thirst, often without food, in cold and exposure. And, apart from other things, there is the daily pressure on me of my anxiety for all the churches.

The pain did not deter Paul. Instead, he used it to motivate him. His weakness made him rely on God's strength. Paul endured persecution to prove a point. As you read his perspective on suffering, you can hear him getting up repeatedly each time his opponents knocked him down. Paul played hurt.

But we have this treasure in jars of clay, to show that the surpassing power belongs to God and not to us. We are afflicted in every way, but not crushed; perplexed, but not driven to despair; persecuted, but not forsaken; struck down, but not destroyed; always carrying in the body the death of Jesus, so that the life of Jesus may also be manifested in our bodies. For we who live are always being given over to death for Jesus' sake, so that the life of Jesus also may be manifested in our mortal flesh. So death is at work in us, but life in you.

Paul describes the Christian life as a worthless vessel that carries a priceless treasure. If the vessel breaks, it's no loss. One could say that a jar of clay is doomed to fail. But it doesn't matter, it's the treasure it carries that counts.

Pain is an expectation, not an exception. So you carry about in your body the treasure of the gospel. And if you do, you must be willing to play hurt. The Christian life is hard and it hurts. But it doesn't matter. Why? Because Christians play hurt.

The Christians Life is Hard

The Christian life is hard. So you have a hard time understanding the Bible. Keep reading it. Hardly anyone gets it quickly. Don't worry about what you don't understand; strive to obey what you do understand.

Christian growth requires daily time with God, but you're busy. So adjust your schedule. Get rid of wasted time. Set aside time for God and protect it. Seriously, is it really that hard?

Christians learn to pray. Christ calls us to sacrifice, and the Bible commands us to gather for worship. God promises His people many things, but He never promises us that it will be easy. Athletes practice and train every day. They do it for trophies. We do it for a treasure. So deal with it and do it.

The Christian life hurts. Christ calls for us to confess sin and forgive others. We must endure temptation. When you say "No," your friends may accuse you of thinking of yourself better than them. Christians don't think we are better than anyone, but we believe that we are better than we were. They may call you a hypocrite and tell you that you're going to fail. It hurts. Play hurt.

Some of the most painful things I have suffered and most disappointing things I have experienced have been in church. Some of the most hurtful and hateful words ever spoken to me were by people at church. I've had plenty of reasons to quit. But Christ died for me, and He died for the church. So I keep going. Why? Everything that goes wrong proves the Bible right. Does it hurt? Yeah. But Christ never gave me an excuse to quit, so I play hurt.

I've been in places where there is intense persecution and oppression of Christians. I've met men imprisoned and beaten under communism. I've heard their stories, and I've seen their scars. They never wavered. They played hurt.

I met a family in a Mulsim-ruled country who lost all their possession when local authorities bulldozed their home. Christians were not welcome in that community. What did they do? They picked up what they could out of the street and played hurt.

I've seen the bullet holes in a Cathedral where military police slaughtered Christians as they prayed. While suffering they demonstrate the truth of Paul's words as they are "always carrying in the body the death of Jesus, so that the life of Jesus may also be manifested" in their bodies. They play hurt.

What Keeps Us Going?

Why? How do we keep going? The answer is in a later paragraph of the same passage in which Paul talks about the nature of the Christian life as one being a jar of clay that carries inside of it a priceless treasure. He says:

The Waste of a Wasting Life

Every person, whether you follow Christ or not, has the same problem. We all have bodies that are wasting away. Christians and non-Christians have one thing in common. We are dying, and you can't change that reality.

So if we only have one life that is wasting away, why waste it? Why not give something temporal to something eternal?

The sanctifying work of Christ in our lives keeps us playing through the pain. The gospel gives us perspective. We understand that pain is temporary for an eternal gain that is without comparison. Every day the Spirit of Christ within us and the testimony of His Word reminds us that it's worth it.

And we play through the pain as we meditate on Christ on the cross. Our Savior suffered for us. How can we possibly think it beneath us to suffer for Him? Jesus went through agony so that we might have this opportunity.

When I read 2 Corinthians 4:16-18, it reminds me of Coach Steve Sparks. He coached football at nine different high schools in Georgia for over 41 years. He would send countless coaches and former players daily devotions to encourage their faith.

Just before our 2019 season, Coach Sparks was diagnosed with pancreatic cancer. Just as our season began, he passed away. I know in those last days, he was in tremendous pain, but he never wavered. Why? He had an eternal perspective on the pain. He would quote 2 Corinthians 4:16-18. These verses would pop up in different places as our coaches and team grieved over losing such a beloved coach.

The way Coach Sparks handled that pain proved his faith and made a deep impact on our players. His suffering became proof, not that his faith had gone wrong, but that all along he was right. The strength of God is there in our weakness. Temporal suffering does turn our hearts to an incomparable eternal weight of glory. A man will suffer for Christ when he is grateful for how Christ has suffered for him.

Coach Sparks understood that he carried a treasure in an earthen vessel. He was tough and was willing to play through the pain.