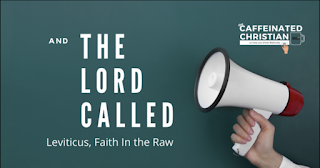 Can you name the first five books of the Bible?

Here’s the answer: In the Beginning. The Names. And He Called. In the Desert. Words.

The Hebrew Scriptures/Tanakh are named by the first words in the text. Hence, what we call Leviticus becomes in Hebrew, Vayikra or “And He called.”

Think of how naming books like this would change some classic titles. George Orwell’s 1984 becomes A Bright Cold Day. To Kill a Mockingbird would be entitled When He Was Nearly Thirteen. And one of my personal favorites, Fahrenheit 451, would be forever referred to as It Was a Pleasure to Burn. That one works pretty well.

The name Leviticus is unfortunate. Leviticus is a Latin/Greek, now English word that refers to the priests of Israel, the Levites. It was named so because early scholars saw it as a book for the priests. They saw it as a handbook on sacrifice and ritual—sort of a “how-to” guide for Tabernacle worship.

Again, unfortunate. Pay attention to the first words of Leviticus.

The Lord called Moses and spoke to him from the tent of meeting, saying, “Speak to the people of Israel and say to them, When any one of you brings an offering to the Lord, you shall bring your offering of livestock from the herd or from the flock.

Question: Who’s not there? There’s no mention of priests.

Moses wasn’t a priest. Aaron was the priest. The Lord didn’t call Aaron. He called Moses.

Notice God’s message to Moses wasn’t for the priests, but the people. “Speak to the people.” “When any one of you . . .”

Before God tells Aaron how to cut the offering, God tells the Johns and Janes, the Calebs and the Abigails, the people, how to bring the offering. Leviticus is not a book primarily for priests. Vayikra is a book about God speaking to people.

God hasn’t given up on us.

In his book Leviticus: The Book of Holiness, Rabbi Jonathan Sacks offers insightful, interpretive clues that help us understand the purpose of Leviticus.

The Lord spoke to Moses on Mount Sinai, saying, “Speak to the people of Israel and say to them, When you come into the land that I give you, the land shall keep a Sabbath to the Lord.

The second clue is similar and comes in the final sentence of the manuscript.

These are the commandments that the Lord commanded Moses for the people of Israel on Mount Sinai.

Think about the way Exodus ended. They build the Tabernacle. The glory of the Lord fills it, and then the text seems to indicate that the people are on the move again after a significant pitstop at Mt. Sinai.

But notice that according to Leviticus 25:1 and 27:34 the vast majority of the Leviticus text was given to Moses, for the people “on Mount Sinai.” This makes Leviticus a recollection. Leviticus is a thought bubble that pops up while the people are on the move.

“What we have, in other words, between Exodus 24 and Leviticus 25 is a massive parenthesis, some forty chapters long, by far the largest of its kind in the Hebrew Bible.”

So why the parenthesis of Leviticus? The short answer – that stupid, stupid, indulgent, idolatrous, ridiculous, sinful mistake of the golden calf (Exodus 32).

As Moses was on the mountain meeting with God, the people were at the base, putting pressure on the priest to give them an idol. God gave Moses the commandments. Aaron gave the people a golden calf.

Humans are prone to suggest ways to fix it themselves. But Moses didn’t give us Leviticus. Neither did Aaron. Leviticus comes from God’s call to stupid, stupid, sinful people.

Sinners have broken fellowship with God and have surrendered their right to suggest ways to fix it.

There are so many places where the Bible could have just ended, and God walk away. Genesis 3:7. Genesis 6:5. Exodus 33 was a really close call.

The story could have also ended yesterday or last night. You and I gave God another opportunity with our stupid, stupid, indulgent, idolatrous, ridiculous sinful mistake of ________________, to end the story and our relationship.

But vayikra. He called – “to the people.”

Leviticus may be to you and me the Bible’s weirdest book. But realize how bloody yet beautiful it is. Leviticus is 27 chapters that say to stupid, stupid, indulgent, idolatrous, ridiculous, sinful people that God has not given up on you. And here’s how He repairs the relationship.

It’s His initiative. It’s His grace. It’s His mercy. It’s His voice, not ours. He reveals. We respond.

The Direction of Worship

The opening line of Leviticus makes a significant statement about worship. Again, God didn’t speak first to the priests, but to Moses, for the people.

Worship does involve priests and preachers. They carry responsibility. Leviticus will literally dress down and dress up the Levites. But the priests – your pastor – your preacher is not your Savior or your performer. At best, he’s a facilitator.

You bring your offering to God. The priest is just there to make sure that it’s handled properly.

Sinners struggle with idolatry. Sinners are prone to make everything about them. So, as sinners do, we make worship about us, for us. The church becomes an a-la-carte program of offerings for you and for your family. The pastor and worship leader are chosen by you and the criteria to which they must attain is “what you got out of it.” By “it” I mean the music and the message. And if you like it then you’ll come back. And if you don’t, then “God’s leading us” to another church where we can be fed.

We turn the church into a cult of personality that competes for business by offering quality “God” performances instead of gathering where God’s people seek God’s presence.

Leviticus is a revelation that we worship upside down. It’s so unpredictable and at times awful that it makes us uncomfortable. Leviticus asks for no one’s opinion. Because Leviticus begins with “vayikra,” it sends a strong message to the sinner that the next 27 chapters are about what God wants, what God says, and what pleases the Lord.

IT’S NOT ABOUT YOU. You’re not “at worship/church” to be a critic or a consumer. Leviticus reminds us that God spoke first because stupid, stupid, indulgent, idolatrous, ridiculous sinners create golden calves and call them God. Since when did idiots become credible critics? You and I are not consumers of worship. Leviticus reminds us that we are to be careful and grateful participants admitted by mercy and grace. The fact that vayikra, “and he/THE LORD called” means that HE is the ultimate consideration in worship, not you and not me and not your preacher and not the priest. Worship begins with what God wants. Leviticus tells you what God wants out of it.

There are no customers in Leviticus. Only forgiven worshipers.

What Leviticus says about the Son.

The Book of Hebrews helps us interpret Leviticus through the lens of God’s Son, Jesus Christ.

Now the point in what we are saying is this: we have such a high priest, one who is seated at the right hand of the throne of the Majesty in heaven, a minister in the holy places, in the true tent that the Lord set up, not man. For every high priest is appointed to offer gifts and sacrifices; thus it is necessary for this priest also to have something to offer. Now if he were on earth, he would not be a priest at all, since there are priests who offer gifts according to the law. They serve a copy and shadow of the heavenly things. For when Moses was about to erect the tent, he was instructed by God, saying, “See that you make everything according to the pattern that was shown you on the mountain.” But as it is, Christ has obtained a ministry that is as much more excellent than the old as the covenant he mediates is better, since it is enacted on better promises.

So in a way, we can say that Leviticus is all about Jesus.

So, let’s do a semi-idolatrous thing I warned you about in the last section. Let’s think of Leviticus in terms of ourselves for a moment. If you were going to write the script for how your son saves sinners, what would you vayikra/say? How would you make the call?

If our son became Leviticus, we would certainly make it less painful, sacrificial, and bloody.

But the SON is not merely moral. The purpose of His incarnation was not His leadership. The SON is not here to help. The SON came to save sinners. The SON becomes the bloody sacrifice.

Place Romans 5:6-8 against the backdrop of the painfulness of Leviticus.

Had the sacrifice ultimately required our son. Had Leviticus begun with our voice, it would certainly be a book less bloody, less painful, less sacrificial and more moral, influential, and psychologically beneficial.

But it isn’t. And as a Gentile follower of Christ who is 3,000 years and a million miles from Leviticus, Leviticus is critical for me. For we are something of mystics in our worship. Jesus died for us and I’m thankful. But at best, sin screwed my life up, but it never really cost me. It never even cost me the life of a bird I bought with what little money I had . . . like that poor woman approaching God in Leviticus 1:14-17.

So Leviticus helps the Gentile Christian mystics that we have become see the blood. It helps us come to grips with the cost of sacrifice. It keeps me from walking into worship in the same way I walk into a Braves game. It calls for me to think less about how good I think the music is and it calls for me to bow beneath the weight of God’s mercy as He calls to me – the stupid, stupid, indulgent, idolatrous sinner.