All Sins are Not the Same, Leviticus 4 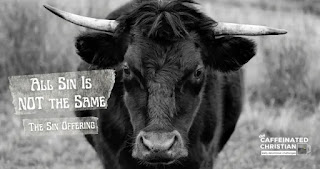 A lot of Christians say that all sins are the same. Do you agree? If so, the big bull in Leviticus 4 says that you’re wrong.

But Biblically, all sin is not the same.

Paul indicates in 1 Corinthians 6 that sexual sin is different from other sins.

Flee from sexual immorality. Every other sin a person commits is outside the body, but the sexually immoral person sins against his own body.

Leviticus 4 also presses home this point that all sin is not the same. Leviticus 4 is about the sin offering. The sin offering is God’s provision for people who commit sin “unintentionally (Lev. 4:2).” You did it but didn’t know it. Later, you realize what you did was wrong (Lev. 4:13). This is a different kind of sin than what the Bible calls sin “with a high hand (Num. 15:30).” You know it’s wrong, and you do it anyway. Hebrews 10:26 calls this “sinning deliberately,” and there is real danger for those who keep on doing it.

But there is another issue addressed in Leviticus 4 that shows us that all sin is not the same. Sin is not only about what it is but who it is. For example, look at the people lining up for sacrifice in Leviticus 4. Check out what they bring. With most people, you’ll see a lot of little lambs (Lev. 4:32). But with the priests, there’s a bull (Lev. 4:3-4).

We don’t need Leviticus 4 to tell us that a leader’s sin looms large.

How many 13-year-olds will put something inappropriate on Instagram today? The good news for 13-year-olds is that they will never again be as dumb as they are right now. This is especially true of 13-year-old boys. Logical thoughts are few and far between in the brain of a 13-year-old boy. 13-year-olds will disappoint their parents. They may need a good scolding from a coach or a teacher. Hopefully, they will realize the error of their ways, repent of sin, reject foolishness and choose wisdom. That’s little lamb stuff.

The bigger they are – the bigger the bull! For example, the newly elected President of the Southern Baptist Convention (of which I am affiliated) has recently admitted to plagiarizing another pastor’s sermons. My Twitter feed is full of bull as a result of it.

What’s not on my Twitter feed? Grandiose discussions of how dumb 7th-grade boys can be.

I was the successor to a pastor who resigned from a church due to sexual sin. I can’t remember the exact details, but I believe I came to the church almost 2 years after the incident. But the sin was far from gone. Everywhere you turned, there were bulls. It was a sin between two people, but it affected countless numbers of families.

Theologically, Christ is the supreme sacrifice. His blood is our atonement (Heb. 10). But practically, some sin makes a bigger mess. It costs more to clean up. We all sin. But when some people sin it disrupts more, it hurts more. Again, look at Leviticus 4. The sin of the common man, it’s not uncommon. But the sin of the anointed priest puts him at the head of the line. Why? Who is going to offer the sacrifices for the rest of us? In every other instance, the anointed priest is involved in the sacrifices (4:16, 4:25, 4:30, 4:34).

If you’re going to offer a lamb, the leader must first bring his bull.

Pastors, we can sin and still preach. I’ve done it. But it makes a mess. And frankly, to borrow some slang, it can be a bunch of bull. It’s time to kill it and come clean.

Sin makes a mess. But the good news of Leviticus 4 is that God’s people can come clean. Our Savior is our sacrifice. 4 times in Leviticus 4, the text tells us that no matter the weight of one’s leadership, “And the priest shall make atonement for him, and he shall be forgiven (20, 26, 31, 35).

Leaders. Teachers. Elders. Chairpersons. Influencers. Your sin is not the same (Lev. 4:22f). You are shepherding souls. Deal carefully with your sin and come clean.

Imagine approaching the entrance to the Tabernacle in Leviticus 4, bringing sacrifice for your sin. And in line is your pastor with his bull (Lev. 4:1-12). Behind him are the elders with their bull, confessing the sins of the congregation (Lev. 4:12-21). And then there are scattered about key leaders bringing goats, coming clean (Lev. 4:22-26). Behind them is that guy who put something stupid on Instagram. And there’s that lady who . . . and that guy that . . . and somebody’s dad . . . and somebody’s daughter . . . coming clean.

Leviticus 4 sends a sobering message to the church and its leaders. Instead of coming to church and sitting there like “I’m fine,” get in line and come clean.

Pastor and bull should be first in line.

Come clean, but be careful.

Because of Christ, He has made atonement for sin, and we shall be forgiven. So we can confess, but we should be more careful. Everyone’s sin is not the same. Depending on who you are and what you do in the Kingdom, our sin makes a mess that impacts others. Seeing the bulls at the front of the line should be sobering. Sin is costly. Be careful.

So pastor, leader, influencer, look to the line of sinners in Leviticus 4. See the bulls and remember that for you, sin costs more. Praise Jesus for forgiveness. But be careful to stay clean. Sin no more (John 8:11).

The sin offering of Leviticus 4 says the same to leaders and influencers. You can come clean, but be more careful. Your sin is more costly.