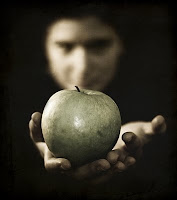 If the Bible is the story that explains why the world is as it is, we should find some profound connections between Genesis 3 and our current state of affairs.  (introduction to series)

To borrow a philosopher's term, I would call the end result of Genesis 2, the best of all possible worlds.  God is good for all and in all He has done.  Man is good for the world.  The woman is good for man.  The environment is teeming with potential.  The story is given traction because all of it is able to multiply and bear fruit.  The world in this state is declared by God to be "very good."

Central to life in paradise is a pair of trees (and yes, there were two despite what you learned in Sunday School; see Genesis 2:9).  One is a tree of life.  The idea here is a tree able to keep man living.  As long as he has access to this tree he has what he needs to live eternally on the planet God created for him.  In my previous post I briefly called attention to the idea that implied that in the concepts of be fruitful, multiply, and fill the earth is the idea that man was to grow the garden of God.  As man subdued the earth the fruit would spread and what man enjoyed in Eden he could also enjoy in Texas, or Sri Lanka, or Montreal, or wherever the images of God went to work.  I don't know if the Tree of Life was reproducible or if "Tree of Life" extract was exportable, but whatever it was, it was the earth's greatest antioxidant.  Your local Piggly Wiggly would have inevitably carried Oreos, Milk, Bread, and oh yes, don't forget to get some Tree of Life jam for sandwiches.  I'm not sure how this would have worked.  We never really got the chance to find out - but the day is coming!

Satan enters the scene with a question, "Has God really said?"  This question continues to stump us humans.  The question is posed to us in a variety of ways, but the end result is always the same, doubt.  Is the Bible really God's Word?  Is that what that verse really means?  Can we trust that the Bible is true?  Satan's question gave us the permission to be enlightened; as does the History Channel, Discovery Channel, and intellects similar to the likes of Bart Ehrman and Richard Dawkins all of whom continue to scoff at what God really said.

At least we think this toying with doubt to be enlightenment.  If we can offer a decent explanation whether it be scientific, philosophical, mathematical, archaeological, biological, or by any other -ology we can surely master, then we believe we have escaped the confinement of believing what God says.  Satan's lie introduced us to skepticism (Gen. 3:5).  Skepticism, ironically enough, became the springboard of our confidence.  We may not be able to trust God, but we can sure trust that whatever we now pursue without him will lead us to the truth.  It is here that all of our -ologies got off on the wrong foot.

If we can ever justify a way that what God has said does not apply to us, we make our ignorance more palatable by calling it enlightenment.  Temptation has always been a word game.

"You will not surely die (Gen. 3:4)."  Isn't it amazing that there can be life in the fruits all around us, and yet we will take a bite out of the other one just to see if there is no death in it.  What we fail to realize is that the curse of sin is not death itself.  The curse is the process of dying.  Adam and the woman did not drop to the ground as corpses, but something wonderful died indeed.  When we ate the forbidden fruit the best possible world went from very good to not good at all.

In the best possible world, God was good for the world.  Now the planet's only two humans are hiding in the bushes.  Is the atheistic pursuit to rid the world of its creator really a step toward intelligence or is it merely a step back into the hedges?  Are the people at Freedom From Religion offering us freedom are are they beckoning us to have a seat in poison ivy?

In the best possible world, man was good for the environment.  Now the planet is cursed because of him.  The work the images of God would do to produce fruit will now be a fight with thorns.  Man will now struggle to maintain the healthy symbiotic dominion God gave him over the environment.  Secularistic environmentalism recognizes rightly that there is something wrong in man's relationship to the planet, but a hands off, anti-dominion approach is not the proper solution to a world gone wild.

In the best possible world, woman found not only equality with man, but union with him.  Now the description of the relationship between man and woman is more like an MMA fight rather than a beautiful dance.  Woman will desire man.  Man will rule over woman.

Most people blow it in their interpretation of this verse.  To understand what is going on here we must recognize the context.  God was not describing how to correct the curse, God was describing what life would be like under the curse.  "Rule" and "overcome" are life in tension, not life in order.  Man ruling is not the solution to our ills nor is woman overcoming.  It is here that we see the dangers of feminism and the roots of gender confusion.  We have been born, since the beginning, with the proper biological bits and pieces but we are becoming increasingly confused as to what the words "man" and "woman" mean.  The current solution is to blur the lines rather than to define them.  As liberating of a pursuit as we think this may be, it is not a part of the cure, it is instead the propagation of the curse.

In the best possible world man praised the woman.  Now man blames her.

In the best possible world birth is blessed.  Now birth, like everything else, will contend with the pain of the curse.  It will not only hurt to have a child, it will also hurt to raise him.  In a world gone wrong the battle for birth also becomes a word game - choice, unwanted, unplanned, undesirable, population control.  Abortion is not a choice, abortion is Satan's deadly answer to the inconvenient pain bringing kids into the world will cause.

In the best possible world we had what we needed.  Now we have conservatives and liberals.  We have feminism, feminist men, masculine women, gender confusion, homosexuality, adultery, and pornography.  In paradise we walked with God openly.  Now we cry out from the bushes.

The only person in paradise who was honest was God.  He told us that if we ate of the forbidden fruit we would die.  It was Satan that told us we could sin and not die.  We still believe the lie.

How do we fix the mess that is our march of death?
Email Post
Labels: Dabbles in Apologetics Meta-what?