Genesis 1 and 2 in Meta-Narrative 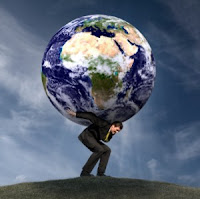 Christians believe that the Bible is this world's meta-narrative.  The reason we exist (creation).  The reason we are the way we are (the fall).  The solution to our problems (redemption in Christ).  The action that will return us to the ideal (renewal).  All of these ideas are connected in the story of the Bible.  If this is true, that the Bible is our meta-narrative, there should be some direct connections between the Biblical story and the world as we know it, that shape our thinking.  This influence on our thinking is known as the Biblical world-view.  In Sunday School your mamaw called it, "doing what Jesus said."

I am currently walking through the meta-narrative of the Bible with my Old Testament class at Christian Heritage School in Dalton, GA.  As I have time, I would like to provide a series of posts helping my students, their parents, and anyone else who wants to follow along, make some critical connections between the Biblical story and life as we know it that should shape our thinking.

Life as we know it is filled with strong opinions.  A common refrain in secular positions is that God is bad for society.  This is certainly part of the platform of the garden variety atheist who will argue that the idea of religion/god is the root of many wars and much to blame for social and moral oppression.  An organization that has put a face on this idea is The Freedom from Religion Foundation.  If you have not heard of FFRF try to put a nativity scene on the lawn of your local courthouse or hold a public school graduation in a church - their lawyers will probably give you a call.

Feminism has become the godless meta-narrative for the plight of women in society.  Organizations such as NOW, the National Organization for Women, contend that women would be happier in a society that is less influenced by male dominated ideals.  Women should certainly not be subjected to archaic and oppressive meta-narratives like the Bible.  Given the opportunity, women would think better of themselves if they were not directed toward social stereotypes like marriage, giving birth, motherhood, or even subjecting themselves to the common female social "dress codes" like jewelry, bras, or long hair.

The question of life has become one secularists find increasingly difficult to answer.  In a planet of diminishing resources, population control becomes an influencing ideal behind every social concern from environmentalism, to abortion, to health care.  I am not sure if the url is authentic, but it appears that the kind educators at Princeton have provided a nice online resource that gives an overview of the growing population control movement (Link here).  Bill Gates has a solution to reducing the planet's CO2 levels - reduce the number of humans and you will get rid of earth's biggest issue in the carbon equation.  Don't take my word for it.  Watch and hear the man yourself (Link here).

If the whole importance of a meta-narrative thing bores you, perhaps you just woke up!  Everyone has a meta-narrative they follow.  Your life fits into someone's story - your congressman, your kid's teachers, your president, your sheriff, your doctor, judges, lawyers, actors . . . everyone.  You thought you were just buying Windows '98 when in fact you were buying a blue screen that funded the propagation of the idea of population control.

What about the environment?  In a godless meta-narrative this one is easy.  Man is bad for the planet.  In the opening statements of their mission statement, groups like Sierra Club say things like this, "Thus, we must control human population numbers and seek a balance that serves all life forms."  Is any of this beginning to sound repetitive?

So if these are the ideas that are influencing public policy, education, and the secularist meta-narrative, to what logical ends does this lead us in laws that govern human life, health care, marriage, and freedom?

The meta-narrative of the Bible opens with some powerful statements.


When we take God out of the narrative we become one of two things.  The left side of us becomes little more than baby killing, man hating, environmentalist crazies, that walk through life incredibly loud but thoroughly confused.  The right side of us becomes money grubbing, social elitists, who can't articulate a decent position because there is little intelligence in their whining.  Without God in our story, the majority of us become a mindless, apathetic people who don't care; simpleton slaves of the state who do not realize their very lives are about to be written out of the narrative by people who do care.

Without understanding the narrative, most people who call themselves Christians are a confusing bunch of pharisaical moralists who think they are making a difference because they go to church and pray in restaurants; but in reality making no social impact at all.  I think Jesus called it salt without saltiness that is good for little more than traction control for the bottom of the world's shoes (Matt. 5:13).

Understanding the story means everything!

Genesis 1 and 2 is the best possible world.  God was good for the world and the world was good.  As the story continues, something goes horribly wrong.  The evidence of this catastrophe surrounds us everyday.  Whether it is Genesis 3 or 2013 we are still reeling from the introduction of sin into the planet and the loss of the tree of life.
Email Post
Labels: Dabbles in Apologetics Meta-what?