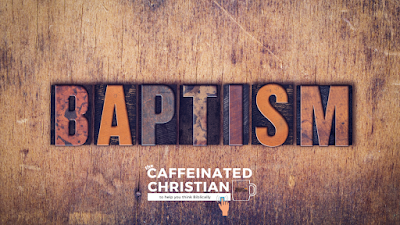 I have had many inquiries this week from people who are pondering whether they should be baptized again. The most common formula is someone who was baptized after a conversion type experience as a child, who did not fully comprehend the ramifications of the decision at the time, now as an adult and growing in Christ, has a desire to be baptized now that they are fully understanding of its significance.

I would be someone, in some sense, to be included in this formula. I have been baptized twice, once as a child following a conversion experience and then again at the age of 19 after experiencing many doubts about the sincerity of my earlier decision. I will share that story this weekend in the sermon and will post it in writing Monday, Lord willing. For now I would say that baptism is a matter of conversion and conscience.

Baptism, which corresponds to this, now saves you, not as a removal of dirt from the body but as an appeal to God for a good conscience, through the resurrection of Jesus Christ. (1 Peter 3:21).

As odd as this passage is overall there are some aspects of it that are very clear. One is that baptism is not able to remove the filth of the flesh. At the same time, clearly taught in this passage, there is something salvific in baptism. Baptism is a natural part of one’s salvation experience.

I know this is very un-Baptist of me, but in our race to distinguish ourselves from those who overemphasize the role of baptism in salvation I think Baptists are guilty of underemphasizing the importance of baptism (as odd as this may be for a people who borrow the term baptism for their identity).

We are guilty of making a crass statement, “You do not need to be baptized in order to be saved.” I think we should be careful in making this statement. Baptism is an integral part of the expression of salvation. Does this mean if a person claims salvation but does not follow through with baptism that they are not truly saved? My response to this would be, given that the person has had the opportunity to be baptized, but has not, one has to wonder if they are indeed born again.

I understand that there are multitudes of people who fear baptism whether it is a concern of being before people or a fear of water. But in a faith that demands my all, and in a faith in which multitudes have died for Christ, I am not sure fear is ever a valid excuse.

If you are an unbeliever who needs salvation and baptism there is a matter of a convicted conscience you are seeking to answer. An element of my baptism story is that I very much knew what I needed to do.

At the same time if you are a growing Christian who now appreciates the meaning of baptism more than you did when you were a child, but at the same time you are fully convinced you were saved as a child, I would recommend against you being baptized again. If it is a matter of conscience, fine, but if it is only because you know more now than you did then, that is not sufficient reason to be baptized again.

As an adult who has gained a greater appreciation, use that knowledge to more fully appreciate the baptism you have experienced. I should also say that I do not think being baptized “again” crucifies the Son of God all over again as some have expressed in their inquiries this week. I think the Bible makes clear that apostasy and sin have the capability of making this a metaphorical reality, but the Bible never mentions that baptism or re-baptism has this power. On that note, I would say that if I ever have the opportunity to travel to Israel and be baptized in the Jordan River; that will in effect be baptism number 3 for me. This is indeed, for me, a matter of conscience. Should you be baptized again? Let the Lord of your conscience answer that question.

Randy Shannon said…
My response to baptism has always been that it's our first act of faith. We are baptized because God says so! As an appeal to God for a good conscience.
Jesus asked, "Who is my mother and who are my brothers?" Matt 12:48
His answer was,"For whoever does the will of My Father who is in heaven, he is My brother and sister and mother." Matt. 12:50
If we are to obey God, then we must be baptized, not as an act of salvation but because of salvation.
If we fail to act on this clear command of God, how will we act on his call in our lives?
If we don't believe, we don't have faith, if we don't have faith, how can we act, if we don't act, how can we call ourselves the children of God? 1John 5:12
July 10, 2009 at 7:22 PM