Our Pharaonic Response to Pandemic 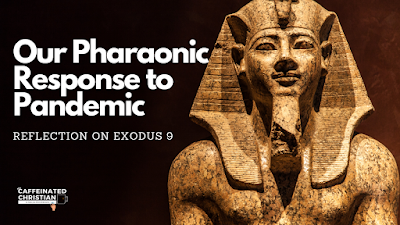 Then the Lord said to Moses, “Rise up early in the morning and present yourself before Pharaoh and say to him, ‘Thus says the Lord, the God of the Hebrews, “Let my people go, that they may serve me. For this time I will send all my plagues on you yourself, and on your servants and your people, so that you may know that there is none like me in all the earth. For by now I could have put out my hand and struck you and your people with pestilence, and you would have been cut off from the earth. But for this purpose I have raised you up, to show you my power, so that my name may be proclaimed in all the earth. You are still exalting yourself against my people and will not let them go. Exodus 9:13-17

The plague sequence in Exodus sets before us a collision between the sovereignty of God and the stubbornness of people. There are frogs, flies, darkness, and hail, but there is also the hardening of Pharaoh’s heart. Both God and Pharaoh are active in the process. One about as often as the other.

By Exodus 9, we are deep into the sequence. Exodus 9:13-17 introduce plague 7, hail. And because we’ve already seen this scene play out 6 times previously, God spells out to Moses exactly how this will go.

God will display His power through a plague.

Pharaoh will not let the people go.

As we read this story, it causes us to question, how can a person see so much of God and end up so lost?

Now therefore, forgive my sin, please, only this once, and plead with the Lord your God only to remove this death from me. Exodus 10:17

It’s as eloquent as any sinner’s prayer.

It’s as empty as many sinner’s prayers.

Our Pharaonic Response to Pandemic

Before we cast stones at Pharaoh, let’s allow the narrative to cast light upon us. As I write this, we are still ‘officially’ in a pandemic. Coronavirus hasn’t been a dramatic experience Nile to blood, but it’s been pretty serious. As bad as it’s been losing 500,000+ people, let’s not forget in the beginning, we thought it would be far worse.

God sends the same message to Pharaoh. It could have been worse.

For by now I could have put out my hand and struck you and your people with pestilence, and you would have been cut off from the earth. Exodus 9:15

Let’s think of what we’ve experienced in these past 15 months.

During the pandemic, we also experienced unrest and riot. There have been protests and shutdowns. Hypocrisy abounds.

There have been killer storms, torrential rains, and deep freezes.

These past 15 months have been our plague story of sorts.

Judging by what I see, I would answer these questions as follows.

For it to be over.

According to Christianity Today, we took time in quarantine to read the Bible less.

In a pandemic, Barna let us know that instead of running to God, 1/3 of us quit church.

But hey. The economy is rebounding nicely! During the pandemic, we didn’t worship or read the Bible much, but we bought 31% more camping gear, 63% more bicycles, 56% more kayaks, and 22% more binoculars.

Coronavirus brought us a revival in camping gear but made deep cuts in the church.

We are more like Pharaoh than we think. Like the hard-hearted king, we don’t want God. We just want this to be over.

And when he got it, he moved on.

The collision between God’s sovereignty and our stubbornness is on display every day. Day in, day out, it’s the same old game. Life happens. We want it to be over. We pray a little. We promise a little. We tell God we’re sorry. We get some relief, and then we go buy more camping gear.

We don’t get into the Word.

We don’t go to church.

We need to be careful in this hardening of our hearts. If anything, the plague sequence shows us, it’s that God may turn up the heat when we harden our hearts.

He is not worried. He is not to be pitied. And He is not failing.

Just like Pharaoh, THE sovereign God is glorified despite our stubbornness. He is undeterred. His people will be redeemed. Some will be saved.

Others will buy more outdoor gear.

Which one are you?

We still exalt ourselves.

We will not let some things go.

We don't want God. We just want it to be over.

Instead of figuring out the interplay between stubbornness and sovereignty, why not do the simple thing Jesus called us to do. Repent of sin and believe in the gospel (Mark 1:15). This time of plague needs to be a time we repent, not play.