Commotion When Trump Came to Town 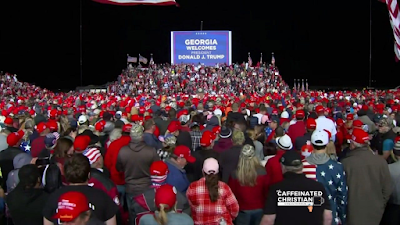 On January 4, 2021, President Trump came to my town and it caused quite a commotion.

I live in a small town. In most of the local restaurants, the same waitresses have been serving the same tables for years. Children attend the same school systems as their parents and grandparents. Around here, people still refer to a trip to the store as "going to town."

So you can imagine what it must have been like on January 4, 2021, when President Trump came to town. There were blacked out Secret Service vehicles in the area, barricaded roads, and our small airport was transformed into a stadium.

The President's arrival was preceded by three military helicopters. Even inside my home, I could hear their blades cutting the air as they escorted Marine One in for a landing.

When the President of the United States of America comes to Dalton, GA, the preparations are noticeable. The day is different.

The Gospel of Mark begins with the job description of John the Baptist. His task was to prepare the way.

The beginning of the gospel of Jesus Christ, the Son of God. As it is written in Isaiah the prophet, "Behold, I send my messenger before your face, who will prepare your way, the voice of one crying in the wilderness: 'Prepare the way of the Lord, make his paths straight,'

The language "prepare the way" describes the preparations of pathways for a king to travel. It means to remove any obstacle that might hinder his arrival. Because a dignitary is coming, do things differently. Prepare the way means that when he arrives, you are ready.

There are people in my town who spent half of their day standing outside on a chilly January day waiting on the President.

How much time will we spend in the Word of God this week?

The President announced that he was coming to Dalton just a few days before his arrival. January 4 was a Monday. The Monday after New Year is a day people usually go back to work. But instead, they took the day off because Trump came to town. Many people canceled plans and rearranged their day so that they could be there when the President arrived.

I wonder how serious we will be about setting aside time for worship on The Lord's Day this Sunday?

A few days before his arrival, I noticed vendors set up on street corners selling Trump flags, t-shirts, and bumper stickers. A lot of people bought those products and proudly displayed them because they admire our President. They want to proclaim their allegiance to him as he arrives.

We have no problem being unashamed that we are all about Trump, but I wonder how long has it been since a lost person has heard anything about Jesus from us?

Preparation is about priority. It's about doing things differently. It's about getting rid of things that are in the way and getting ready.

If Christ is your King, then your life should reflect this principle of preparation. Christ called for His people to be ready. We should be repentant and exhibit a priority on obedience to His commands. Prepare the way.

What is something you will do differently today that makes it apparent to others that your priority is on serving Jesus?

Get Pulse for a personal read or men's Bible study.