A Biblical Response to the Storming of Capitol Hill 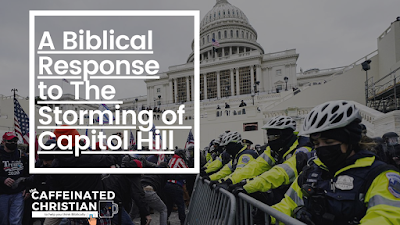 On Wednesday, January 6, a group of people stormed Capitol Hill in Washington DC. I would describe the scene with one word, sad. Another word I might use would be, disturbing.

But I want to interject another word, a much-needed word, discernment.

Discernment doesn't ask the question, "what do I think?" as in what is your reaction or opinion. It isn't even as concerned with how you feel. Discernment asks instead, "What do I see, and am I seeing it clearly?"

When you remove the lens of personal opinion or political party, you realize that what we saw yesterday was nothing new. Whether it is right or left, black or white, Republican or Democrat, what we saw was what we have seen since the early summer. You could interject those same scenes in light or dark, black or white, January or June, and they are essentially the same.

Once again, people turned a protest into a riot. Once again, a peaceful but angry march turned into an all-out assault of people and property.

The Difference Between Protest and Riot

It's no longer a protest when people destroy life and property. And, we need to discern the difference between protest and riot because they are not synonymous.

By discernment, once again, we can see that a riotous few hijacked the message of many. Discernment listens and watches. It does not rush to label.

We also need to discern the error of political leaders who selectively condemn riots. All rioting is wrong - all of it. A past President or a current one who will give some people a justifiable right to riot while condemning it for others is out of line and is as blinded by hate and rage as the rioters. He lacks love.

What we are seeing is an age of unrest from a lot of different factions. Many Americans feel like they are being treated unjustly based on race, religion, or political ideology. And, however you want to slice that, those liberties are fundamentally American. On every side, you see people who feel like they are losing freedom (some are trying to gain freedom). You have people who feel like they are losing the opportunity to live in a free country and they are not willing to surrender. What you are seeing (on every side) are people fighting for the same thing - freedom.

What we are seeing is conflicting worldviews competing for dominance. We are seeing competing philosophies and values at odds with one another - vying for control.

What we are seeing is a lack of civil debate. We accuse we don't communicate.

Discernment helps you see what is there, but it also asks what is not there? What are we not seeing and hearing?

What we are not hearing are articulate voices. A significant difference between now and the civil unrest our nation experienced 40-50 years ago is the lack of articulate voices. We lack selfless leaders. In those days, you saw leaders who were losing their lives for a cause; now you see leaders using a cause, or crisis, or discontent to increase their power over people.

The lack of articulate voices has left a void of people seeking direction. Their aimlessness has resulted in pointing fingers and placing blame rather than making change. It has also left us to create versions of the truth rather than seeking the truth. Many people are not living in reality and are following strong delusion and deception. This age of social media-driven conspiracy theory is dangerous and unhelpful in finding real solutions. Without discernment, we fall prey to deception.

The Need For Biblical Discernment

And now I want to add one more word, Biblical. Let's talk about Biblical discernment.

Biblical discernment is thinking through what we see through the lens of Scripture.

So, from a Biblical standpoint, then we ask the same questions, what do we see? What is behind all of this disorder, chaos, lack of law and order, and deception? In Matthew 24:9-14 Jesus gives us some guidance that helps us to discern the spirit of the age. This text allows us to see what's there.

Then they will deliver you up to tribulation and put you to death, and you will be hated by all nations for my name's sake. And then many will fall away and betray one another and hate one another. And many false prophets will arise and lead many astray. And because lawlessness will be increased, the love of many will grow cold. But the one who endures to the end will be saved. And this gospel of the kingdom will be proclaimed throughout the whole world as a testimony to all nations, and then the end will come.

The question we ask when we see such unrest is who is going to fix all of this? That's the wrong question. The question of the fix leads us astray as we put our trust in a political party and/or in a President. If we don't win an election, we feel hopeless and helpless. On Tuesday, we saw a lot of people turn a protest into a riot because of grossly misplaced hope.

What's the fix? For our country? I don't know. Who knows?

Can you fix a structure when the foundation is falling apart? We have a massively fragmented society. Ideologically. Politically. The divides are so deep there is not an idea that can bring it all together.

Can We Save America?

In another place in Scripture, Jesus asked, what does it profit if a man gains the whole world but loses his own soul?

There are endless versions of that that can be applied . . . .

Jesus described a lawless, loveless, deceptive age. That's what we are seeing.

By discernment, we see the warning signs and seek a Savior.

American doesn't need a party change; America needs a heart change. The revolution doesn't begin at the White House, but your house. The fix for our country is not on Capitol Hill; it is in my heart and your heart.

What we saw on Capitol Hill is the same thing we saw last summer. Most people were protesting and calling for change, but others carried away by false hope went to destructive ends.

In this age of lawlessness, lovelessness, and deception, we need to turn to Jesus Christ as our Lord and Savior. No President, political party, or law can change your heart. We need Christ. In repentance and faith, turn from sin and turn to Jesus. Receive His gift of eternal, abundant life.

If you know Christ, Matthew 24 helps us to see that in this loveless, lawless, deceptive age that we are to follow Christ's command to proclaim the gospel. Previously we asked the question of what are we NOT seeing or hearing. I am ashamed to say that one thing we are not seeing or hearing is the church; the people of God, boldly proclaiming the gospel. Our call is not to fix the situation but to suffer through it as we point people to the Savior.

What we saw Tuesday was sad. It was disturbing. But it is a signal of a desperate need. We need to turn to Jesus. We need heart change.

Presidents can influence the country. Laws can regulate us. But there is no piece of legislation that can change the human heart. We need heart change - discern that - see that.

And if people don't hear about the salvation that is in Christ alone, that is the true tragedy.