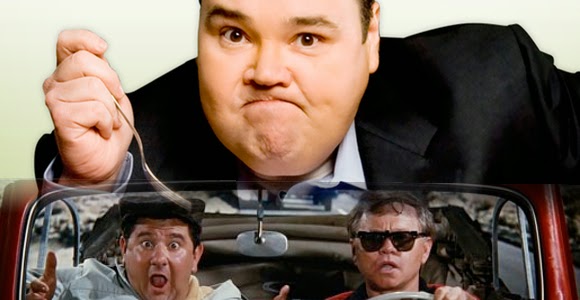 Early on Monday morning I was driving in the darkness listening to the news on the radio.  Two very talented and funny men had died.  Mickey Rooney who was revered to have a unique career that has "spanned almost the entire history of motion pictures" passed away at the age of 93.  It would be difficult to find a person alive, of any age, in our country who has not seen something in which Mickey Rooney was an actor.  From his appearances in The Muppet movies, to the short but mighty security guard who declared that Ben Stein's character, "He looks like a wierdy!", to the classic Its A Mad, Mad, Mad, Mad World, and even dating back to appearances in silent films, you, your kids, your grandmother, and your great grandaddy have all at one time or another laughed at Mickey Rooney.

The second was John Pinette who passed at age 50.  Pinette was the portly fellow who was car jacked in a small town in the final episode of Seinfeld.  Jerry, Elaine, George, and Kramer crassly looked on as desensitized New Yorkers who were merely witnesses to something that goes on all the time.   By failing to help, the Seinfeld crew landed in jail becoming an example case for the conveniently new "Good Samaritan" law.  The final demise of the main characters on a show "all about nothing" was humorously ironic as they did nothing for John Pinette.

I grew familiar with Pinette while living in Birmingham, AL listening to the Rick and Bubba Show.  My wife and I recite his classic punchline to his fast food routine everytime we get behind "that guy" who can't make up his mind.  "Get in the back of the line!"  No one can do justice to the classic way Pinette delivered that line.  The brilliance of Pinette is that the guy could make food funny.

The news of death has a strange way of bringing to the human soul a mixture of nostalgic memories and sobering thoughts.  We appreciate the contribution great people make to our lives.  Those involved in entertainment, especially for someone like Rooney, become definers of culture.  There are markers, movies, one-liners, and images at different moments of our lives that we cannot separate from them.  We are saddened to hear that they are gone, but we can't help hearing the news and laughing a little as the memories of them begin immediately coursing across our minds.

There is also a sobriety these moments bring.  None of us are going to survive life.  The actors, comedians, athletes . . . time has a way of humbling all of us and death is cruel in that no matter how great we are, eventually our lives are taken away.  93 or 50, we are always too young and death is never convenient.

These types of stories always remind me of a strange passage in Genesis 6.  There the Bible says that the sons of God went to the daughters of man and to them were born these legendary figures the Bible only refers to as mighty men of old, men of renown.  I'm not here to offer my theory on what exactly these mighty men may have been, but I don't think that they were the earth covered, fallen angels Aronofsky gave us in the recent film Noah.  What I do know is this.  They were legendary.  Every early reader of the Gen. 6 story would have known exactly who they were.  But no matter how great they were, they did not survive the flood.  Only one man and his family found a way to survive the judgment.  Legendary or not, Noah and his family were the only ones on the ark God designed for them.

Death has no regard for legends.  Legend is no merit for salvation.

The news of death has a way of reminding us that the point of life is not merely to be entertained or enjoyed.  There is an all important decision we are all faced with, legends and non-legends alike.  Death levels the playing field for all of us.  What's next?  How do we survive what is to come?

The Bible teaches clearly that after death comes the judgment (Heb. 9:27).  Like Noah's flood, the reckoning for sin brought by a holy God is a deluge faced by all of us.  We have only one way of escape.  Actors, athletes, legends and non-legends alike are offered only one means of salvation, Jesus Christ.  Like the ark became God's ordained way of escape for Noah and his family, so Christ has become God's chosen one, a vessel of salvation for me, you, and your family (1 Peter 3:18-22).

When we stand before God we will not be measured by how funny we were, how many points we scored, or even by how many people knew our name.  Our opinion of ourselves will not stand, no matter how good we think we are.  Even a well versed eulogy offered by a family member or a close friend will not suffice.  Your eulogy may make the rest of us smile at your funeral, but smiles carry no merit when it comes to the salvation of souls.  What people think of us does not agree with how God measures us.  All we are given as merit for salvation is the Son of God.  As sinners we have forfeited any hope that any mark of acclaim or accomplishment will be enough.

If you do not know Christ as your Savior, please take the opportunity offered to you today (2 Cor. 6:2).  Repent of sin and believe in the gospel (Mark 1:15).

I would not even begin to know the eternal fate of Rooney and Pinette.  But I do know that you and I have been extended grace.  Let's believe upon Jesus for our salvation and receive His gift of eternal life before our lives are wrapped up in a news report or an obituary, another one has passed.
Email Post
Labels: Understanding the Bible