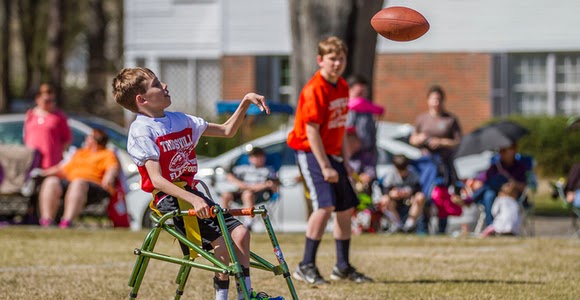 Here's a great article about a dear friend of our family, Hayden Nelson.  Even though I own him in NCAA Football on XBox (and he knows it!), he's still my favorite player.

TRUSSVILLE — Kenneth Hardin believes Hayden Nelson is in hog heaven on The Mall in Trussville’s Cahaba Project, surrounded by parked SUVs that form an imaginative stadium wall, cheered on by proud parents in outdoor chairs.

Hardin is the coach of the Trussville Youth Flag Football Redskins, a Trussville Parks and Recreation team that plays against other fourth-, fifth- and sixth-graders. Nelson is an 11-year-old fourth-grader from Moody, and he is the Redskins’ center.

Nelson is the team’s ball-hiker because he has cerebral palsy, a disorder that affects a person’s ability to move and maintain balance and posture, and sometimes cognition. The United States Centers for Disease Control and Prevention estimates that one in 323 children in the U.S. has cerebral palsy. The disorder affects Nelson’s legs and his arms a little bit, and he’s aided by a lime-green walker with orange grips.

But don’t let the four-wheel walker he pushes fool you, Nelson comes to play for the 40-minute games.

Take Sunday, for example. The Redskins, wearing bright red jerseys with “Trussville Youth Flag Football” emblazoned in white across the chest, scored on their first possession against a team wearing orange, a long run down the right sideline. Nelson wanted his teammate to spike the ball in the end zone. Nelson has talked about wanting to play cornerback, that he will smack passes to the turf. He’s competitive.

Allen Nelson, Hayden’s father, said this is his son’s third season in the flag football league. He played last spring and in the fall. He’s also played baseball in Moody’s Miracle League. On Sunday, mother, Wendy, and sisters Hannah, 15, and Hope, 13, watched him play his first game of the spring season.
“He has a love for football,” Allen said.

Hayden is a diehard Alabama fan, though his mom pulls for Auburn.
“It’s fun around the house,” Allen said.

After the Redskins converted a two-point conversion to take an 8-0 lead Sunday afternoon, Hayden made his way to his dad on the sideline, where the elder Nelson asked his son who his favorite player is.

Allen said that Hayden playing flag football is great because he can’t experience everything that most little boys can. The sport provides him some “normalcy.”

“It’s just fun to watch him play with the other kids,” Allen said. “I think the other coaches thoroughly enjoy having him out here.”

Nelson was provided the opportunity to play by Hardin, with whom the Nelsons attend church at Ridgecrest Baptist Church in Trussville. Hardin knew how much Hayden loved football, as evidenced by his playing college football video games, though he has more of a tendency to compete on “Call of Duty.” Hardin said he took it upon himself to get Hayden involved, not knowing if someone else might have given him a chance.

“Everybody’s been supportive, and it’s been great,” Hardin said. “(His teammates) pitch in, help him and there’s never a comment made. It’s pretty cool.”

But how would he involve Hayden in the games? Hardin said it popped into his mind one day that Hayden could snap the ball, facing the quarterback like it’s done in adult flag football games. Once the left-handed Hayden has tossed the ball to the quarterback, he turns and watches the play unfold, though in the past he’s scored in games in which the team is too far behind. Sometimes, just five players — the games are five-on-five — have shown up, and he’s played linebacker because there are no reserve players.

“He loved it,” Allen said. “He didn’t want to be anywhere else.”

Hayden is not treated any different. There is no special treatment, other than his dad or Hardin occasionally pushing him up the field.

On Sunday afternoon, the Redskins allowed a touchdown in the final two minutes to cut their lead to 22-20. The orange team came up about a yard short on the two-point attempt, and Hayden’s team held on by running out the clock near the middle of the 50-yard field. After Hardin spoke with his seven players, Hayden walked over to his dad, all smiles, and told him they had won.

“He likes being out here,” Allen said. “He feels completely normal like all the other little boys out here on the football field. He just thoroughly enjoys it, loves it.”