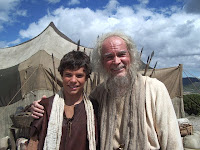 I posted earlier this week that I am beginning a new endeavor in my life, that of a barely part-time 9th grade Old Testament teacher.  I also shared that one of my classes is all girls.  That was never more apparent than it was today as I brought them the story of Abraham’s almost-sacrifice of his son Isaac.
I had a masterful lesson plan, one which I imagined would result in a great epiphany in the minds of the masses about the meaning of sacrifice.  The problem was that I was not teaching the masses, my assignment in first hour was 9th grade girls.  So, as the class began I read Genesis 22 with the authority of a professor and the passion of a preacher.  I called attention to a few important caveats to the story and then I asked a question that was well rehearsed in my mind.  A question that was destined to peak the curiosity of even the most distant soul.  “If Isaac is to survive, what does he need?”  One young lady responded, “A replacement.”  Yes!  Being fully satisfied that I was achieving the task of infusing a high level of Biblical scholarship into such young souls I did what any good AV guy “back in the day” would do.  I turned out the lights and began showing the 2012 version of what was in the 1982 educational institution known as “The filmstrip."  Today's filmstrip - Abraham and Isaac beautifully depicted via DVD.
The movie I shared is called, “God Provides.”  It is a well done short film produced by Crown Financial.  It features Dean Jones who appeared in the 1968 classic, “Herbie the Love Bug.”  50 years later Dean is fittingly portraying Abraham, a 110+ year old father with what looks to be a 14-15 year old son named Isaac.  In the opening shots Isaac runs to his father with the drama that only slow-mo can provide (you can swing a hammer in slow-mo and it will look awesome).  I should have known at that moment something was up when one of the girls said about the slow-mo, dramatic, running Isaac boy, “Who's that?”  I knew they didn’t mean “Who’s that?” in the sense of “Is that Isaac?”  That much was obvious, so I quickly retorted, “One of the Jonas brothers.”
“Really?”
“No, not really.  No more talking.  Watch the movie.”  I’ve always wanted to say that with teacher authority.
When the cinematographic masterpiece faded and the credits began, I paused the film and brought my closing comments.  As good as I thought my opening remarks were, in my mind, my closing comments were an educational masterpiece of epic, Biblical proportions.  I turned immediately to Romans 5 and once again with professor authority and preacher passion I read the Word and explained the meaning of sacrifice.  Amazing stuff.
Upon the completion of my masterpiece, one of the girls raised her hand and asked, “Could you go ahead and play the credits?”  Play the credits?  Why in the world were these girls wanting me to play the credits?  What sort of strange humans want to watch the credits?  Then I realized what was happening.  They were crushing on Isaac.
Once they found out who the kid was that played Isaac they wanted me to Bing search his name and pull up pictures of him.  We had gone from the meaning of "substitutionary atonement and the typological connections of Abraham and Isaac in the cross of Christ" to boy crush in a matter of seconds.  This is why there are tabloid magazines in grocery stores.  The human mind just can’t keep focus on bologna and orange juice, it needs something to crush on.
One thing I have learned this week, girls are multi-taskers.  Even though they talk a lot and don’t appear to be focused or listening, they retain nearly 100% of everything you say.  This is why marriage can be precarious for a man at times.  Men think very little of what they say.  Women remember everything their husbands say, and think of it often.  I did a practice quiz with my students this week and most of them were spot on in answering the questions.  So even though they may have been crushing on Isaac, I’ve got to believe somehow God planted a seed in all of this and they retained something of substitutionary atonement.  The quiz is tomorrow.  We shall see.