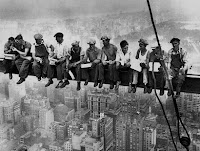 When words are repeatedly misused or overused they quickly lose their meaning and in time come to describe something else all together.  I give you gay, awesome, and sick.  In times past a gay man could have an awesome day and the statement said nothing about his sexuality.  It meant only that a happy man witnessed something in the day that was truly awe inspiring.  Now awe inspiring things are sick.  Awesome things are merely above average.  “How was your cake?”  “Awesome.”  There was a time that no cake was worthy of awe and too much of it would make you sick.
“Worship” is another word that has been victimized by overuse and misuse.  In modern church culture when one hears the word “worship” he or she is given to think in terms of who (as in who is leading), where (as in where will worship be held), and when (as in what time will worship begin and end).  Ironically the same thing has happened to work.  We think of it more as a place where we are employed rather than a task we are called to do.  Biblically speaking worship includes these elements; who, when, and where).  The “who” of worship has included Levites, choirmasters, and musicians.  Worship was never meant to be chaotic or thoughtless.  There is nothing spiritual about coming to the Lord without careful planning.  This is why we have Leviticus.  The “where” of worship has included the Tabernacle and the Temple but is now described in terms such as “in Christ” and “in the Spirit.”  In the Book of Revelation there will be worship around the throne.  Make no mistake, worship has its place.  The “when” of worship has included a liturgical calendar, carefully planned by God, giving His people markers throughout the week and the year that would remind them to come back to Him.  We are inescapably a people of the clock and worship requires time.
The mistake of the modern church is that it has come to think of worship only in terms of who, when, and where.  This has led us to make a serious theological error.  We have come to believe that what we do through the week is work.  What we do on Sunday is worship.  Creating this chasm between the who, when, and where of work and the who, when, and where of worship has led us to believe that work has nothing to do with worship.  We would even give ourselves to believe that when we work we are merely laboring under the curse, burdened by the punishment of sin – Adam and Eve’s children on the chain gang. When we worship we are not to work but sing.  In an era of poor theology work and worship have become bitter enemies.  Such thinking has even affected our eschatology (the way we think about the end of time).  We think that in the end we will worship God forever.  The image drawn to mind then is that we will sing to God and have nothing else to do.  We are afraid to say it for fear that we may go to Hell, but honestly, if eternity calls for us to do nothing but sing – it sounds rather boring.
To reconcile these concepts of worship and work we need only to follow the meta-narrative of Scripture.  God is introduced to us in Genesis 1 as a working God.  The more He works the better life becomes.  Every act of work brings forth good.  He rests on the seventh day (Gen. 2) not because he is tired, but because he is finished with the task at hand – creating a life giving, life sustaining world.  It is important to understand that in finishing on the sixth day that God was finished forever.  There was still work to be done.  To join Him in the work God created man.  As God’s image, man was to be God’s deputy and continue His work of bringing forth good.  Man was important to the continuing work of God, for without man there was a lot of dirt in the world producing nothing (Gen. 2:5).  Man was made to work.  Like God, man would work for something good.  God had worked to benefit man.  In fact the word “rest” implies the enjoyment of what God has done for us.  As God’s image, man would work, making a contribution to creation that would bring benefit to others – something good.  It is here, in imitating God at work that work and worship merge.
When you are “at work” today think not of it as cursed toil, but as an act of worship. This is not to say that your work is not burdensome or difficult – sin has impacted our work.  It is not as easy as it used to be (Gen. 3:17), but that does not mean that work has lost all its good.  Your attitude at work, the quality of your produce, what is accomplished at the end of a week ultimately reflects whether or not you think God is worthy to imitate – to bring forth something good for the benefit of others.  This happens long before you ever “go” to worship and sing a song.  In fact if you “go” to worship and sing a song to a God you have shamed in your work all week what are you saying to your employer, your fellow employees, and ultimately to God?  A poor week of work is neither worshipful nor beneficial to anyone.  Bad work is not good.
So before you waste a day trolling the internet, tending to personal business, or making personal calls – remember you are not just “at work”, you are “at worship.”  You are called as God’s image to be a worshiper and work to bring forth good.
Email Post
Labels: Things God Teaches You Because You're Alive