Caesar Augustus, The Roman Context of the Birth of Christ 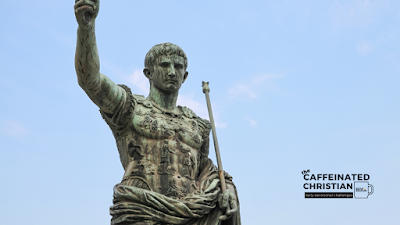 Resource:  Everett Ferguson, Backgrounds of Early Christianity 3rd. ed.
The birth of Jesus Christ is the event on the Gregorian calendar that split time.  In an increasingly secular society the calendar is divided between BCE (before common era) and CE (current or “christian” era).  Yet until recently the eras of the calendar were counted in relation to Christ, Before Christ or B.C. and A.D. or Anno Domini, the Year of our Lord.
For the next three weeks we will be looking at the Christmas story from a different perspective, a historical one.  Most people are familiar with the Gospel narratives, found in Matthew and Luke, of the birth of Christ, but relatively few have heard the story of what the world was like when Jesus was born.  We read Luke 2:1, “In those days a decree went out from Caesar Augustus . . .”  What were “those days” like?  Who was Caesar Augustus?  Luke’s early readers would not and could not have read the Christmas narratives without its historical context.  Many of us, for generations, have read the Christmas story with no historical context.  By doing so we are missing a great deal of the impact of the message that Luke and Matthew were trying to convey.  As a result we have adopted a vanilla form of Christianity that is disconnected from its historical and textual roots.  In the end what we preach, I fear, is no gospel at all.

To remedy this we will explore the historical context of the Christmas narratives, through this series, The Last Days of B.C., and by doing so gain a greater understanding of the gospel message the Biblical writers were seeking to convey.  My prayer is that by recovering this story we will also recover the gospel of Jesus Christ in its proclamation and in our devotion.
Christianity emerged out of three historical contexts:
This week we will discuss the Roman context in the last days of B.C.  It is this Roman world that Luke notes in Luke 2:1.  Next week we will discuss the Jewish context in the last days of B.C.
Outside of its Judaic roots in the Old Testament, Christian history covers roughly 330 B.C. (Alexander the Great) to 330 A.D. (Constantine).  The period from 330 B.C. to 30 B.C., Alexander to Augustus, is known as the Hellenistic Age and is the story of how Rome came to be.
Before Alexander we have the very Old Testament landscape with its various empires (Persian, Egyptian, Assyrian, Babylonian, etc.).  But with Alexander we have the rise of the Greeks and the unification of the world.  Prior to Alexander, Greece had risen to prominence as it became the cultural elite of the world through philosophy.  But it was not until Alexander began to conquer the world that Greek culture actually began to spread to foreign lands.
This Greek ideal was known as Hellenism.  Because Athens was the center of this new age of thought, dominated by speech and reason, the movement was given the appropriate name Hellenism as educated Greeks were known as Hellenes.  Greeks were no longer simply Greek by birth, but by education.  They were not bound by genealogy but by culture.  In this way, the various nations of the Mediterranean world slowly became “Greek" or Hellenized.  We see this in Paul’s writings as he does not specify ethnicities when he speaks of the power of the gospel to save, he simply states that the gospel is the power of God to save the Jew first and also the Greek (Rom. 1:16).

When Alexander died three dynasties emerge from three of his prominent generals:
1.       Ptolemaic – Egypt
2.       Seleucid – Persia, Syria, and Asia
3.       Antigonid – Macedonia
Ptolemy I brought Hellenism to Egypt by founding the great library in Alexandria (one of only three cities with Greek names in Egypt at the time).  Unter the Ptolemies Alexandria becomes a cultural, educational, and spiritual epicenter for the Greek world.  Historically and Biblically, Alexandria is important to the church because a vital manuscript family is born there from the meticulous scribes who copy the Scriptures.
It is from this strife between the factions that Rome begins to emerge.  Moving into the final two centuries of B.C. Rome is a loose collection of city states with common law and culture.  The land was conquered by armies.  The people were conquered by culture, but the empire began to emerge when Rome solidified its control as it captured the gods.  Rome absorbed foreign lands by not only taxing and educating them, but by absorbing their dieties.  The final step of Hellinization was to “Romanize” the foreign gods by promising them greater devotion if they would join the Roman pantheon.  Once in the Pantheon Rome not only influenced economies and powers, but also garnered religious devotion.
Rome is the Greek word for “strength.”  Yet as B.C. drew to a close there was more work to do before Rome would truly be the strong empire that was essentially Alexander’s Hellenistic vision.