Your Vote Doesn't Make A Difference in the End 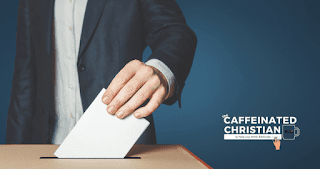 Revelation 8 opens with an ominous 30 minutes of silence. God is about to tear apart the world that He created. Seven angels appear before the throne of God. To each, God gives a trumpet. These angels play a role in the judgment about to unfold, but the Bible calls our attention to an eight angel.

God doesn't give angel 8 a trumpet. Unlike the others, this angel doesn't come empty-handed. He holds a censer, an ash pot used for burning incense. This scene is reminiscent of the Old Testament tabernacle as the priests would use a censer to transfer burning coals from the altar of sacrifice to an altar of prayer that stood before God. And now we watch something that once took place at the tabernacle now transpire at the actual throne of God. Here is how the scene unfolds.

And another angel came and stood at the altar with a golden censer, and he was given much incense to offer with the prayers of all the saints on the golden altar before the throne, and the smoke of the incense, with the prayers of the saints, rose before God from the hand of the angel. Then the angel took the censer and filled it with fire from the altar and threw it on the earth, and there were peals of thunder, rumblings, flashes of lightning, and an earthquake.

And with that, God ignites the final phases of His judgments that ultimately complete the salvation of His people and the redemption of creation from sin.

So now, let's do some Bible study together. Look back at the scene in Revelation 8. What did they offer at the throne of God? Was it your vote or your prayers?

But despite how you feel about this last election, allow me to draw your attention to another Biblical truth. America's Presidential election did not change the Book of Revelation. The Word of God is settled in the courts of Heaven. God is going to tear down the world, and you and I don't get a vote. But God commands us to pray.

You are entitled to your opinion of this past election. You may have even Tweeted it - I sure have! But have we prayed? Angels don't offer our Tweets as a sacrifice before the throne of God. It's our prayers that make the difference in the end.

Keep perspective. Your vote was important, but it is your prayers that make the difference. Pray, dear saint of God! Pray!

Create a list of ways you should pray for President Trump and for Joe Biden. These are men in positions of great power. Pray that God would reveal to both of them that they are ultimately responsible to Him. Pray that God would give them wisdom to lead in a tumultuous time in our nation. Pray that unrighteousness would be judged and that as a nation we would seek repentance and redemption.