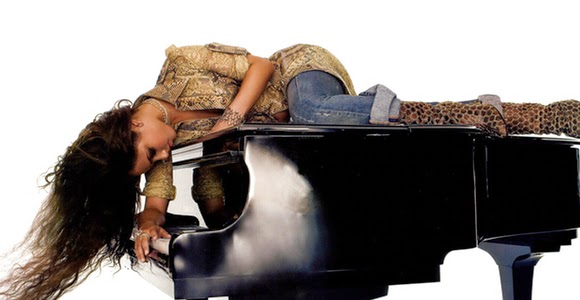 I grew up in the late 70’s and 80’s.  We invented the power ballad.  What child of the most eclectic and unreal generation of music hasn’t sat at a red light belting out Journey’s “Don’t Stop Believing” and actually thought you sound just like Steve Perry?  I do.

Some would argue that Dark Horse is not about Katy Perry, it is a song about drugs.  Oh.  My mistake.  But is that progress or a sign that a girl that God loves is even more deeply disturbed?

I pray Katy Perry finds what David found in Psalm 30.  Can you imagine a redeemed singer standing up at the Grammy's, not simply thanking God for "this award" but actually saying what David said in his Psalm?  Can you imagine Katy Perry standing on the world stage saying that she has been to Hell and back (Psalm 30:3) and has found that "His anger is but for a moment, and his favor for a lifetime (30:5)."  Can you imagine Katy Perry standing before millions saying at a time in my life when I was least committed to Him, Christ remained committed to me?  It is only when we become "wide awake" to this reality that we can truly overcome.
In Psalm 30 David cried out to a  God who heals and restores.  He was crushed as a dismayed self-promoter, but raised from the dust of death a worshiper.  In the end David proclaims that if he dies, the only thing God has done is that He has lost another worshiper.
“What profit is there in my death,
if I go down to the pit?
Will the dust praise you?
Will it tell of your faithfulness?
Hear, O LORD, and be merciful to me!
O LORD, be my helper!”  (Psalm 30:9-10 ESV)
I want to reprint a testimony from Sarah who grew up in the church I pastored in Birmingham.  As her pastor, I saw Sarah, her mother and sisters go through some very tumultuous circumstances.  Sarah certainly had a lot to overcome.  A year and a half ago, Sarah made a tragic mistake that took her to the place David found himself, the dust of death.  As you read her testimony, notice the absence of self-promotion and the sense that she has been raised purposefully by God as a worshiper.  What you overcome is not as important as how you overcome it.
“Today marks 18 months that I should have died. I was supposed to be taking care of a 98 year old lady (who is now 100 years old!), but instead, she saved my life. My dependence on pain medication was no joke, and my senseless choice of drinking vodka on top of popping pills inevitably stopped my breathing. I should have died. My GOD SAVED ME by having this amazing woman make the calls for an ambulance to come. She had seen my heart and stomach convulsing, and the paramedics said that they were seriously about to intubate me- right as I finally started breathing. For so long, I was ashamed. Yes, I was angry at myself for making such stupid decisions to put those things in my body. I was very upset when I saw the faces of the people I love, and who love me, not just in the emergency room, but even after that horrible night for a long, long time. You think you're in control until you aren't. I wouldn't have known how people would have reacted, but the thought of my family and friends hearing the news of my death due to an accidental overdose had me in tears. How selfish of me to be so careless. Hurting people I love is unbearable. Then that guilt and shame comes with coping, analyzing why we do certain things, and opening up to work through the issues. Negative people will easily remind you of your mistakes and problems which will bring back that guilt. I am not ashamed anymore, and I want to help people who have been stuck in this awful place. I am not using Facebook as a platform for gaining attention, and I am definitely not bragging about my weaknesses and issues with addiction. If you struggle with meds (prescribed or not), or know someone who is, I encourage you to get help. Accountability is the most important way to keep on track (for me, anyway). I HAVE to testify and exclaim that my Savior has me here, still, and here for a reason. For His Glory, I must live. So many awful things happen to good people as well as good things happen to awful people. I do not know why I was given another chance... but I will definitely take it. To the wonderful family I was working for, who I've known my whole life, You know who you all are, and I am thankful for you brothers and sisters in Christ. I still think about Mamaw everyday. I don't know if she would remember me, but please tell her- the girl whose life she saved says Hello and that I thank God for her everyday (I thank God for all of you and the lengths you all went to so that my family would know).”
“Life is SO short, as we all know. But seriously, use this time to not only tell the people you love that you love them, but show it to them. I love you all!”
That is a girl on fire!
Email Post
Labels: Dabbles in Apologetics points psalms and songs sermon manuscripts