The Wandering Son (Gen. 4 in Meta-Narrative) 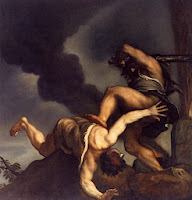 Adam ate from the Tree of Knowledge of Good and Evil thinking he would become like God.  When God pronounced the curse upon Adam it was a rude awakening.  He would not become deity, Adam would return to dirt (Gen. 3:19).  Yet God cast Adam and his wife out of the garden with a glimmer of hope.  A son would be born who would bear the brunt of Satan's blow, but would in the end crush him and would somehow reverse the curse.

Genesis 4 opens with great anticipation.  We find out first that the blessing of God to be fruitful and multiply was indeed in tact.  Eve has fulfilled her name, she is the mother of all living.  Not only has she given birth, but she has brought into the world a son.  Is this the son who will crush Satan?  We get a sense that Eve believes this to be the child of destiny as she praises his birth (Gen. 4:1), "I have gotten a man with the help of the LORD."  And another son is born, with far less fanfare.  There is no applause, no praise surrounding the second son.  We are told only that she named him Abel.

I am an only child, but I have long observed the plight of the second born.  The youngest child is "so and so's" sibling.  The curse is worse if you are the sequel to a superstar.  A stellar academic, a superstar athlete, the eldest child with looks that could kill always leaves for those who come after him the difficult label to shake, "______________'s brother."  Cain is a man acquired with the help of the Lord.  Abel is merely Cain's brother.

The Bible says nothing of Adam and Eve's parenting skills, but it is not difficult to understand the ways of humans.  We bring a child into the world with high expectations.  Our culture fans the flame of the intense pressure of success.  A son is born - who must be proficient in piano, a straight A student, a goal scorer, the leading tackler, bat .300, and be elected the class president.  It is hard to be Abel, but it may be even more so to be Cain.  Lessons, practices, tutors . . . only a diet of free range chickens and green veggies with no pesticides is fit for a child with the potential of Cain.

I had lunch with a couple on Sunday.  The lady works at a Karate studio and interviews potential clients.  She said last week a couple brought in their son to sign him up and she ran the usual gambit of questions.  In the interview it became apparent that Karate might be an issue with his busy schedule.  Mondays he learns an instrument.  Tuesdays and Thursdays he practices football.  Saturdays he plays soccer.  So the final question was brought to the parents, "Why do you want your son to take Karate?"  The mother replied, "He needs an activity."  The child was 4.

We are not enrolling our children for activities.  We are busy raising Cain.

I know nothing of Cain's academic accomplishments or his athletic achievements.  We know only of the man his mother hoped he would be.  In his mother's mind, Cain was Satan's crusher.  Yet instead of becoming Satan's crusher, Cain became his brother's killer.  Such is life outside of Eden.

Genesis 4 is an early indicator in the meta-narrative of life that this sin thing may have done more damage to us than we originally thought.  I know that in a world of sin, such is not the case in every circumstance, but I believe in every birth there is in all of us a hope that this child will be Satan's crusher.  At the very least, we see in the birth of a child the triumph of joy and the power of hope to endure.  In a world in which so many people go the way of Cain, perhaps this child will succeed.

Instead life teaches us a cruel lesson.  We invest in lessons, we spend countless hours at practice, we pay for clinics, braces, and tutors.  Like Eve we so desperately want our child to succeed, but at some point we will learn, our child's biggest problem is not his inability to play the piano.  Our children have in them what Cain had in him; sin.

We are paying good money for success, but we are inevitably raising Cain.  We can shower our children with accolades from the moment they are born, but positive reinforcement does nothing to change our nature.  We need something more.

When Cain was punished by God there was no repentance only protest.  "My punishment is greater than I can bear (Gen. 4:13)."  There was nothing in Cain that made him grieve that he had killed a man, much less his brother Abel.  All Abel was to Cain was the representative of his failure, so he axed him.

In our current age of helicopter parenting we teach our children that they are not responsible for anything less than success.  If you don't succeed its someone else's fault.  Axe the teacher.  Axe the coach.  Axe any difficulty that stands in your way.  Don't take responsibility for the fact that your lack of study or even your lack of ability is the reason you are on the bench or that you didn't win first place; what you need is a new coach, a different teacher, a new school, a better environment.  A "B" is too much to bear.  Second string is unacceptable.  This is why compared to other generations our modern day Cains turn in D level work with an F level of effort but expect an A every time.

So what was Cain's fate?  He was left to wander.  The Biblical text here smacks of irony.  Cain settled in Nod (Gen. 4:16).  The word "Nod" means "wandering."  Cain settled for a life of aimlessness.  If you raise Cain, as an adult he will not be able to hold down a job, pay his bills on time, or do the things necessary to be married.  The first time he is told he is unproductive, that he needs to work harder, that he needs to forgive - the first time he realizes the rest of the universe doesn't revolve around him like his parents did, he will quit.  He will settle in Nod just like Cain.  Nod is a quitters paradise.

Even though his mother wished success upon him, Cain never succeeded.  Cain was not the redeeming son.  By his lack of sacrifice, Cain was not even a redeemed son.  The primary goal of a parent for their child is not success, but redemption.  Jesus asked a pertinent question of all of us exiled form Eden, "What does it profit a man if he gains the whole world, but loses his own soul (Mark 8:36)."  Sin has done more to us than we realize.
Email Post
Labels: Meta-what?