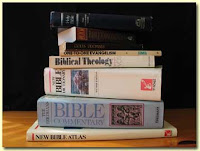 In the past several posts on teaching and Bible study I have argued for an approach that seeks to understand the meaning of the Bible in its original context.  This keeps us from pressing on the Scripture a meaning that is skewed by our own experience and cultural reference points.  Instead, by seeking to know what the intent of the author to his original audience, we actually uncover a more powerful meaning that brings out the eternal relevance of Scripture to our current context.
This all sounds great, but how does the reader make it happen?  The key is tools.  We employ great Bible study tools that will help us get a better understanding of Scripture in context.  I would call your attention to three that I use regularly.  1)  Resources to help us investigate Bible backgrounds 2)  Resources to help us investigate Biblical languages 3)  Resources that help pull all we would investigate together:
Many would refer to this category as Bible dictionaries or encyclopedias.  I chose not to use the term dictionary for sake of confusion and very few of the books that I employ for this task are called “encyclopedia” anymore.  Most people think of a dictionary as a book that helps us with vocabulary, and while this may be true in the common world, in the Bible world, dictionaries are very encyclopedic.  Confusing, isn’t it?

Bible dictionaries are thematically and contextually oriented.  For instance, if you were reading Matthew 16:13, the passage in which Jesus asks his disciples, “Who do people say the Son of man is?”  This is the same passage in which Peter makes the grand declaration that Jesus is the Christ, the Son of the living God.  To understand this passage more fully we can’t ignore the contextual clue that Matthew leaves us in verse 13, “Now when Jesus came into the district of Caesarea Philippi, he asked . . .”  If we don’t care for a contextual reading of the Scripture we will ignore these statements completely, but they are important.  Here is a snippet of what the Eerdman’s Bible Dictionary says about Caesarea Phillipi:
The site has been suggested as that of OT Baal-gad, Baal-hermon, or Beth-rehob, but pottery fragments found thus far do not pre-date the Hellenistic period. The earliest developments took place during that period in the area of the cave and the spring. Greek settlers named the site Paneion (also spelled Paneas and Panias) after the Greek god Pan; the surrounding territory was also known as Paneas. Niches were cut in the face of the bluff and around the cave, recognized as the sanctuary or dwelling place of the deity, and dedicated to “Pan and the Nymphs.” According to Josephus, the region was given to Herod by Caesar Augustus in 20 b.c.e. Herod in turn constructed a beautiful white marble temple dedicated to Augustus, and it most likely became the focal point of the cultic precinct.
It is significant then that the occasion for Jesus question was not Jerusalem, Nazareth, Samaria, or any other town but Caesarea Phillipi which was steeped in idolatry.  If you look up pictures of Caesarea Phillipi you will see the Grotto of Pan still cut into the rocky mountainside.  Here people would come to make offerings and seek answers. Here they sought prosperity and blessing from the gods.  At the Grotto, they sought salvation.  It is in this context, of countless gods that Jesus asks the question, “But who do you say that I am?”
Understanding this context not only makes our reading come alive, but it will also lend itself to more weighty teaching for those who are leading small groups within the church.  As you will see, understanding this background does not restrict my application of this verse to our modern context, but it gives it greater application because it is more faithful to what God has said.
People haven’t changed.  Though we may not cut a Grotto of Pan into the mountainside, we still have our grotto cut; a shrine to our would be saviors.  We easily sell the future commodity of our soul to the decisions of politicians, the rise and fall of companies, or to the allure of popularity.  If we could only catch a break, get noticed, or be the beneficiary of a decision that would bring a windfall our way everything would change.  The problem is that it is not those outside of Christ who are caught in the chase for Pan, but it is those who  would call themselves the disciples of Christ.  Jesus didn’t ask “other men” who He was, He directed the question to His own.
Do you really understand what it means to call Jesus Lord?  It means not only does Jesus stand alone, but it means that he does not save in the same way as the gods cut into the rocks of the countryside.  His salvation is not first political, financial, physical - it calls for something much deeper.  It calls for a collision with the soul, much like Peter had.  “Blessed are you, Simon Bar-Jonah!  For flesh and blood has not revealed this to you, but my Father who is in heaven.”  That realization changes everything.  According to the rest of Jesus statement in Matthew 16:13-20 the people who embrace Jesus’ “Christ-ness” births a powerful community that carries with them access to the Kingdom of Heaven.  With such authority, they make a massive impact on earth.  There is nothing in the Grotto of Pan for them.  They have found so much more in Christ.  Indeed, this becomes the plot for the rest of the gospel and on into the Book of Acts.
A Bible dictionary is a great tool for context.  Here are a few recommendations:
Tyndale Bible Dictionary, The New Bible Dictionary, The Archeological Encyclopedia of the Holy Land, Holman Bible Atlas, Holman Illustrated Bible Dictionary, New Nave’s Topical Bible.
I would also recommend, Ferguson - Backgrounds of Early Christianity, any number of “Life of Christ” books, and the IVP Bible Background Commentary.
Many of these resources may be accessed easily online.  I will share with you this info. in a later post.
Email Post
Labels: Christian Ed.