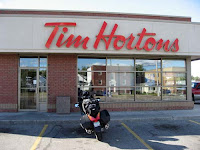 I have been on several mission trips. They have all had a purpose. I went to Russia in '93 to pass out literature and share the gospel. In '06 I went to the Gulf Coast following Katrina to help rebuild. In '09 I went to Romania to teach ministry students in a Christian university and to preach in a church in Kraiva. This week I am in Montreal, not to hand out literature. There are no building projects. I will not be preaching or teaching. I am here only to see. I am not sure who coined the term "vision tour" but that is what we will be doing; traveling several thousand miles to meet with church planters and missionaries, to pray with them and ask that God would help us see what they see. I know little to nothing about Montreal. I know only that it is French and the Expos are no longer playing baseball here. But I know, through a series of providential events that God led me to this city to see what He is doing.

We flew from Birmingham to Syracuse, NY via Charlotte, NC. The airline industry has yet to understand the colloquial phrase "as the crow flies." As US Air flies a 1200 mile trip is not complete without a 500 mile diversion and a 1.5 hour layover. Once in Syracuse we rented two cars and drove the rest of the way. The Fall colors will peak next week in Birmingham, here in Quebec they peaked last week, but it is still beautiful. The border city of 1,000 Islands NY is postcard worthy this time of the year. This part of North America is amazing to see in October.

Soon after arriving we met some IMB missionaries and had dinner with them at Tim Hortons. This does not mean that we ate at Tim Horton's house, but rather that we ate at one of his 8 million diners conveniently located in Montreal. Tim Hortons is to Montreal what the Waffle House of Alabama, there is one very 50 feet, but Tim has less greasy food. It has a Hardee's breakfast (except the biscuits are croissants), a McCallister's menu for lunch and dinner, and a Dunkin' Donuts option 24 hrs a day. At Tim Hortons you can get a sausage biscuit with a bowl of soup and a dozen donut holes for 3,99 Canadian dollars - combo #4 please.

The place was packed and was a microcosm of the city. Montreal is French speaking Quebecois and English speaking Quebecers (Francophones and Anglophones), Hatians, Koreans, and Muslims. Tim Hortons is the corner cafe on Sesame Street. Also with us was a delightful woman in her late 20's. She was French cultured and very good at helping people from Alabama order a hot ham and cheese in Montreal. She looked no different than any other Quebecois in Tim Hortons. I saw no difference. Then the IMB missionary began sharing her story with me. For the last several years of her life she has been victimized in a sex trade/cult group. What they did to her is not appropriate to share on this blog. Yet a few months ago she came to Christ through the faithful witness of church planters and missionaries working in the area. What I saw was a missionary who has spent most of his life without a hometown, who has lived on three continents, who has studied 5 languages, who has spent his life immersing himself into a cultural context with very little money for the sake of Christ who absolutely loves what he does. I saw a twenty something year old woman who looked no different than anyone else in Tim Hortons who has been to Hell and back, whose life has now been radically changed by Christ.

On my first night in Montreal I saw the gospel at work. The gospel is a collision of truth with soul over a sandwich at Tim Hortons. Vision tours are reminders of what it is like to be home, to go to cafes, to see people everyday but see nothing. Vision tours expose our blindness. At Tim Hortons I caught a glimpse of Montreal but I realized that I wear blinders in Trussville, at Main Street Cafe, Joel's, and Jim N Nick's. There are people all around us who need us to take notice of them, invest in their lives, and share Christ.
Email Post
Labels: Canada Missions Trip '11 mission trips