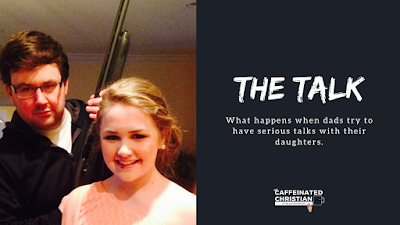 This blog began in 2007 with “Tales of a First Grade Atheist.” My eldest daughter, who was affectionately nicknamed “The Mo” by her baby sister, was indeed the first grade atheist. Next week she begins Jr. High. What will she become? I need professional counseling.


Some things never change. It never ceased to amaze me this past school year when “The Mo” would come home with some stupid saying, or a question about arm pit farts, or a joke that never left the fifth grade. Inevitably I would respond, “Holy cow, they still do that?” That’s what scares me about Jr. High. There are some things about it that I remember. I know the Jr. High monsters and I fear that they are still lurking in the halls. Yet what if the monsters have taken a few decades to grow larger, more intense, grotesque and tempting? What if they eat my daughter? I hated Jr. High in ’85 and I still hate it. So on Tuesday, the day after Jr. High orientation, I decided to take “The Mo” out for breakfast; daddy and daughter, so that we could have the talk.
I need to clarify immediately that the talk I am referring to is not the talk you are thinking of. This is not about birds and bees. Her mother began that conversation with her several weeks ago. The talk I am referring to goes something like this, “I just want you to know that over the next few years you will begin to think I am stupid and you may be embarrassed to be around me. But I’m still cool. I’m your daddy and I want you to know I will always love you and you can talk to me about anything. O.K.?” That’s not exactly all of it, but that’s the theme and all I was really shooting for. I don’t want her to disconnect. I want her to think I am as heroic at 12 and 14 as she did when she was 3. I never want her to stop looking forward to me coming home. She used to hug me when I came through the door, but for the last year or so it is like that has become her sister’s job. There is a part of it all that I know is typical, but it kills me. Hopefully breakfast at the Original Pancake House in 5 Points would afford me the opportunity to offer the talk in such a way that our connection will be preserved even through the monster laden years of Jr. High. Here is the manuscript of how it went.

Even though she had a straw in her drink designed for maximum vertical suction “The Mo” still felt the need to tilt her glass. She poured water all over her lap. She ran to the bathroom giggling the whole way.

When she came back I chatted just enough to steer the conversation back to the talk.

“Dad, did you know Lauren Alaina (from American Idol) has been here, and that she signed the seating chart for the restaurant? It is right back there by the bathroom.”

Then our pancakes came. Mine were cooked with bananas. Hers were covered in chocolate chips. Mo is our child that has yet to discover the wonders of the fork. She has, however, discovered the joy of chocolate. So as I tried to reorient our conversation she sat and picked the chocolate chips, one by one, off her pancakes and eat them like candy.

“I remember when I was in Jr. High, I sort of started thinking my parents were goofy, but now I realize that they . . .”

“Hmmmmhhhhaaakkkk, cough cough.” She choked on her water. We were dead in the water once again. I would work for another 10 minutes. By this time we were out of food and chocolate chips.

“Hey dad, can I use your iPhone so I can take a picture of Lauren Alaina’s autograph?” Since I was trying to convince her I was still cool, I obliged and she giggled her way to the back of the café once again. When she returned she was laughing so hard it was difficult for her to catch her breath.

“Dad, that’s not Lauren Alaina . . . . . .” breathe in, breathe out, “that’s Lauren and Alisa” baahaahaa, pointing to two waitresses in the dining room she said hysterically, “That’s Lauren, and that’s Alisa.”


There was nothing else I could do at The Original Pancake House. I would have to try a new strategy, Starbucks (which also is the victim of an early post). “The Mo” loves Starbucks and she loves to drink Starbucks in Starbucks. I would have her as a captive audience. I would resume the talk at Starbucks.
We received our drinks and went up to the loft to sit. On a couch was a guy who looked as if he had been sleeping for quite some time. Note to self, when at the 5 Points Starbucks, don’t do the upstairs couch. At another table was a church planter, pastor friend who once interned at our church, and who had ironically enough just spoken at our cookout the night before. Weird. So I said my hellos and drew my attention back to “The Mo.” I did not want her to run out of Vanilla Steamer before I could convince her I was still her cool daddy who she could forever confide in.

“So, Morgan, about Jr. High; over these next few years you may feel that I . . .” She looked beautiful. She looks so grown up to me now, like a little lady, and I hate it. But my eye was drawn away from her beauty back to her childishness. On her hand, written in ink, was her locker combination that had somehow survived the shower, and all down her left forearm were chocolate speckles, the only remaining remnants of her chocolate chip pancakes. I laughed.

The talk was pretty much dead. Having a serious talk with a sixth grader is like trying to catch a fly in a thimble. On the way home I blurted out something about cool dads, pretty daughters, and talking to each other. She said, “O.K.” Then she told me that a girl she met the day before asked her if she cussed; and we cracked up laughing. It was not as I had planned, but the talk was now finally underway.

I have a feeling that over the next few years we will need more pancakes, laughter, and daddy/daughter dates. These are the weapons I hope will be effective in slaying Jr. High monsters. I love my girls and do not want to lose them. Mistakes, heartaches, and emotional miscues are destined to come. Hopefully dads with pancakes can help heal them. The talk is not a monologue with a time limit. It is an ongoing conversation with syrup. It is easily interrupted and just as easily resumed. It is big and small, short and long, direct and scattered. It is a 38 year old talking to a 6th grader. It is wondering if I took my daughter to breakfast because she needed me, or her taking me to breakfast because I needed her.

In the first grade she learned that she could question me deeply, even if it was the core of our beliefs. She set aside faith for a few moments and we talked. Now that she is in the sixth grade the questions come in new forms but the conversation continues. The trip to the pancake house helped me to realize that all she needed to know was that I enjoy being with her and no matter what happens, that I would not give up on talking with her, at her speed. She tested me to make sure that I am willing to navigate the intermittent silliness of 6th grade with her. I am more than willing.

So here I go again, back to Jr. High. Pray for me!

David G. Carmichael said…
Brian, that is a great post. With Marley starting 1st grade I am already worried about what she will face. My plan is just as your, stay engaged with all my kids. Let ehm know they are safe with Kathryn and me. I love them too much for anything else!
August 11, 2011 at 4:30 PM